UPDATE: The TSSAA found no violations, so the team will practice and play as normal. The only game Trezevant will forfeit is the Sept. 29 game against Memphis Academy of Health Sciences. Shelby County Schools released the following statement Tuesday:

“The District is diligently working to complete its investigation at Trezevant High School; therefore, no details about the outcome of the District’s investigation are available at this time.  The TSSAA, however, has reported that no violations have been found involving the Trezevant football team, so practices have resumed and the team will play out the remainder of the 2016 football schedule.  The only game this season the team will have to forfeit is the September 29th game against Memphis Academy of Health Sciences.”

MEMPHIS, Tenn. -- A local high school has decided to forfeit some of their football games after grade discrepancies were discovered by the administration.

According to Shelby County Schools, the Trezevant High School principal was conducting an academic audit to make sure all student athletes were taking the right classes to graduate when the discoveries were made.

The district wouldn't go into any specifics.

"Due to the severity of this issue, we have decided to forfeit all games played to date this season, as well as the football game tonight versus Memphis Academy of Health Sciences and all future games until the internal investigation is over," the district said in a released statement. "We understand the impact this has on our students, but it’s necessary as we fully understand the seriousness of the situation."

WREG has learned this involves changing the grades of some players.

A source told us that Trezevant Head Coach Teli White has been suspended during the investigation.

Trezevant athletes wouldn't speak to us saying the school had warned them their futures might be on the line if they did so.

However, many of them denied the grade-changing allegations against him.

Shelby County Schools believe the issue does not extend beyond Trezevant High, but said they would be reaching out to other principals to remind them this type of dishonesty would not be tolerated. 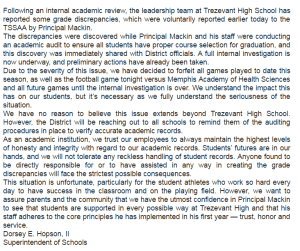 Louisiana Tech hadn’t played since a 37-34 double-overtime victory over UAB on Oct. 31.

OXFORD, Miss. — The University of Mississippi football program has declared a seven-day suspension of team activities due to an increasing number of positive COVID-19 cases.

The decision was made after a discussion with the Mississippi State Department of Health and with the best interest of the student athletes, coaching staff and support staff in mind, the athletics department said.

Knoxville catches a spot in Bassmasters Elite Series for 2021

KNOXVILLE, Tenn. (WATE) -- Knoxville Sports Commission hooked a big one for local anglers as B.A.S.S. officials announced Thursday the city will be part of the Bassmasters Elite Series in 2021.

After the shortest offseason break in the trail’s 16-year history, the series will open its 2021 tournament slate Feb. 11-14 on the St. Johns River in Florida. The season-opener will begin just over three months after the final event of a 2020 schedule that was reworked due to the COVID-19 pandemic, causing a much later finish than usual.

Pfizer cuts 2020 COVID-19 vaccine distribution in half due to supply-chain issues, report says

UPS limits deliveries for some of country’s biggest retailers due to demand, reports say

Driver wanted after Highway 51 crash that left one person dead, three others injured

Carjackings increase in major cities across the US in 2020

After being fined by US, Hyundai recalls more vehicles

Pfizer cuts 2020 COVID-19 vaccine distribution in half due to supply-chain issues, report says