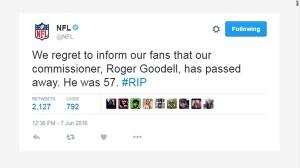 NFL Commissioner Roger Goodell has not passed away, despite what a tweet from the NFL’s account may have led some to believe.

The league’s Twitter account was hacked on Tuesday with a message saying, “We regret to inform our fans that our commissioner, Roger Goodell, has passed away. He was 57.”

The NFL confirmed that its account had been hacked and that Goodell is alive and well.

The message has been deleted, but the hacker continued to toy with the account, sending more tweets mocking the NFL.

"100 days still sounds so far away, but three to four months sounds sooner. It's just so crazy how you put it," she said while chuckling.

The NCAA is about to make an monumental change to its transfer rules.

The Division I Council meets Wednesday and Thursday. At the top of the agenda is voting on a proposal that would grant all college athletes the right to transfer one time as undergraduates without sitting out season of competition.

CLEVELAND (WJW) — The main stage is taking shape and the excitement is building, as Cleveland prepares to host the 2021 NFL Draft in less than three weeks. People are already flocking downtown as we learn more about attractions, concerts and other events coming to Northeast Ohio.

Alfonso Nazario and his family stopped by Mall C downtown to check out the 32 helmets on display, leading up to the NFL Draft in Cleveland April 29th through May 1st.