MEMPHIS, Tenn. — Memphis scored the most goals in team history to extend their unbeaten streak to five matches in all competitions.

The 901 FC blanked Hartford Athletic 4-0 at Mike Rose Soccer Complex in the third round of the Lamar Hunt U.S. Open Cup.

The team ended the match with a passing accuracy of 86 percent and 10 shots on target.

Memphis wasted no time and opened the scoring six minutes into the match. 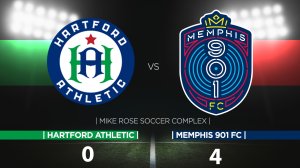 Forward Elliot Collier stood his ground inside Hartford’s penalty box and won a penalty after one of the opposition’s defenders made illegal contact with his leg.

Veteran defender, Marc Burch assumed his role as the team’s dead-ball specialist. He stepped up to the spot and rifled his shot into the left-hand side of the net.

The goal marked Burch’s third goal in all competitions for Memphis this season. The goal was also his third career goal in the Lamar Hunt U.S. Open Cup.

The 901 FC were dominant in the first half, especially through the first 15 minutes. They finished the first quarter-hour with one goal, 60 percent possession and four scoring chances.

Hartford began to push numbers further up the pitch in order to level the score-line and the tactics backfired.

Midfielder Cameron Lindley made a timely interception at midfield and Memphis broke out on the attack with a man advantage.

Adem Najem held up the ball and with one dribble forced Hartford defender, Kyle Curinga to commit a foul.

Burch stood over the free-kick but opted for Lindley to take the set-piece. Lindley whipped in a cross to a dangerous area in the center of the box. A Hartford defender managed to redirect Lindley’s free-kick but the ball ended up in the patch of forward Jochen Graf. The forward took one touch and doubled the 901 FC’s lead from point-blank range.

Towards the end of the half Hartford began to enact their original tactics by playing long-balls forward and testing the Memphis backline. They managed to create one chance inside of Memphis’s final third, but Lindley made a goal-line clearance.

Forwards, Collier and Graf took over the match in the second half. Their one-two passing befuddled the Hartford defenders and eventually lead to the third goal.

In the 59th minute, Memphis worked the ball around in Hartford’s own end of the field and after a few precise passes Collier possessed the ball in Hartford’s box. The New Zealander side-footed a pass into Graf’s run, in the center of the box, and the forward scored with a first-time finish. Hartford’s goalkeeper, Jacob Lissek had no chance to make the save as his defenders left him stranded.

Memphis nearly netted their fourth goal of the night moments after scoring the third.

Graf chased down a pass from Collier and was brought down on the edge of Hartford’s box. Lindley once again took the free-kick and Lissek made a diving save to force the corner kick.

The 901 FC’s dominance continued into the dying moments of the match. The team was hungry for the fourth goal and it finally came in the 83rd minute.

Defender, Jacob Hauser-Ramsey fired in a low-driven shot from the left side of the box and Lissek made the save with his left hand. The ball took a Memphis bounce and Morgan Hackworth slotted in the fourth goal of the match at the near post.

The Bluff City Mafia showed their gratitude by serenading the team with Elvis Presley’s ballad of “Can’t Help Falling in Love” as the final whistle sounded.

The draw to decide the matchups for the fourth round of the Open Cup is set for tomorrow at 10 a.m.

The NBA has told the National Basketball Players Association that it will present a 22-team plan for restarting the season to the league’s board of governors on Thursday, a person with knowledge of the situation said.

The teams that will be going to the ESPN Wide World Of Sports complex on the Disney campus near Orlando, Florida would play eight games to determine playoff seeding starting around July 31 before the postseason begins, according to the person who spoke to The Associated Press on condition of anonymity on Wednesday because the league has not released its proposal publicly.

MEMPHIS -- After two years as an assistant men's basketball coach for Penny Hardaway, Mike Miller has stepped down from Hardaway's staff at the University of Memphis.

Miller made the announcement on social media, saying it's time to spend more time with family and "wherever the journey will take me next."

KNOXVILLE, Tenn. (WATE) - Johnny Majors, a towering figure in the Tennessee athletics community, has died. He was 85 years old.

University of Pittsburgh confirmed the passing of Majors on Twitter Wednesday morning.