MEMPHIS, Tenn. — We’ve all seen them, and we’ve all swerved to avoid them.

Drivers say potholes have popped up everywhere. And they, or someone they knew, went to a repair shop with damage to their tires, alignment or more.

The city said they repaired thousands of potholes, and The Tennessee Department of Transporation said its crews have worked long hours to fill them.

In 2018, TDOT took over state highways in Memphis, including Lamar, Union and Poplar. TDOT says once a pothole is reported, crews try to patch it within 24 to 48 hours. They say if you hit a pothole and damage your vehicle, you can file a claim through the state’s Division of Claims.

But keep in mind, chances of getting your money back are very slim. We asked the state how many claims they reimbursed within the nine counties within our viewing area. Only one claim was approved in the past three years. Documents show $379 was awarded to that driver in 2017. 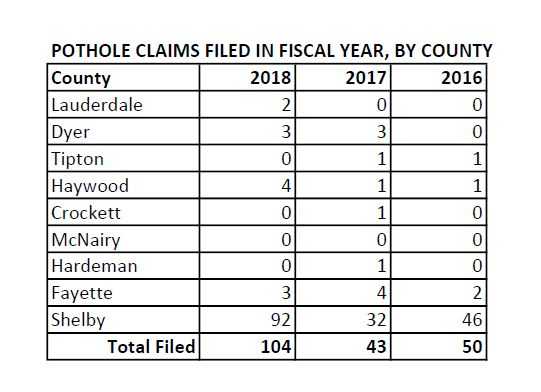 But the state says there’s stipulations when it comes to pothole claims, including the fact that the damage must happen on “a state-maintained road,” and they must be aware of the specific problem and be given a reasonable amount of time to repair it.

Drivers also have to submit documentation, including an estimate. Judging by the state’s provision and stats, drivers told us they will keep praying they don’t hit a pothole.

‘You took my best friend away’: Memphis man killed …

Best gifts for every grandpa