HORN LAKE, Miss. — A walk through the backyard of the units at the Legacy at Westwind apartments brings about bad memories for one woman who used to live there with her husband and children.

She didn’t want to show her face or use her name because she’s currently fighting them in court, related to her family’s time there from April 2018 to May 2019.

She named quite a few issues with her unit.

“We had the ceiling starting to collapse and crack,” she said.

And then there was the persistent issue she feels put her family at serious risk.

“From the day we moved in, we didn’t have air conditioning,” she said.

She described days where the temperature inside her unit would reach in excess of 100 degrees. After her kids got out of school, they would have to spend extended time in restaurants until about 7 p.m. when it was safe to return.

She says management provided a window air conditioning unit that worked for a time. But the central air never did.

The same thing is happening to Jamarius Craft.

The army specialist moved into a unit at Legacy at Westwind so his wife and son could be close to work and school while he commutes to his army unit in Starkville.

“They told us to move in on this date, our move-in date. We came, the floors weren’t shampooed. There’s a lot of stuff wrong with the house. I’ll take y’all and show y’all,” he said.

He led us into the bathroom, revealing a hole in the tub. He said it leaks so much, they can’t use it.

“My son is 4 years old. I’m tired of putting him in the shower where he has to stand up in the shower. He’s 4 so of course he’s going to cry when water gets in his eyes,” Craft said.

They are just two of many.

Complaints show the depth of the issue and explain why the Better Business Bureau gives the complex an “F” rating. 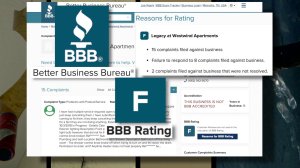 That’s why the woman we spoke with took matters into her own hands and took the Legacy at Westwind to DeSoto County small claims court.

“It would mean the world because it took us a hard hit trying to get into the house we’re in now because of what we we’re facing with the apartment complex,” she said of the payout.

But even though she got that judgment in March, she still hasn’t gotten her money. She wants answers from Legacy’s parent company, Elmington, based in Nashville. The company manages a lot of properties in the Mid-South.

She showed us an email from an attorney for the company where he declared, “No payment is forthcoming.”

WREG went to the management office multiple times to try to get an explanation.

A manager said she couldn’t help.

“I’m gonna have you to give me a moment while you have your cameras in here, that is not something we do. I can give you an email and a phone number,” she said.

She actually never gave a phone number and the email address she provided on a post-it note didn’t work; it bounced back, saying the address had failed.

“I’ve already given you all the information you need, I need you to step outside this office,” she said.

Unfortunately, she gave us a taste of what people who live here deal with on a daily basis.

“It really defeats the purpose of having people in the office to go talk to and tell your problems when they’re just going to push it off and not do anything about it,” Craft said.

Their message is a warning to others to stay away.

Horn Lake officials also said the Legacy at Westwind did not have a valid business license last year or this year.

The complex hadn’t filed for one for next year either, at last check.

WREG contacted Elmington multiple times using another email address we obtained when covering their issues in Memphis but so far they have not sent any response to our questions about Legacy at Westwind.