Skip to content
Breaking News
Breaking News
Passenger jet makes emergency landing in Memphis
Watch Now
Watch Now
WREG Daybreak
This is an archived article and the information in the article may be outdated. Please look at the time stamp on the story to see when it was last updated.

MEMPHIS, Tenn. — Multiple customers have come forward regarding issues with ordering from a high-profile Instagram retailer account with what appears to be a celebrity following.

Keneesha Williams is a single mom living in southeast Memphis. She tries to balance it all,  so that’s why she’s careful about her spending. She was hopeful when she saw custom clothing done by a business called “1of1sbyJolie” back in 2014.

“I did want to support her because she was local. She was a small black business at first and we had mutual friends," Williams said.

She’s talking about a woman who calls herself Angelique Jolie on Instagram. She liked what she saw on the account, especially colorful ripped jeans.

“I said those are cute, work with them. I believe I ordered three pairs,” she said.

Even though it was five years ago, she still had a screen capture of the receipt.

“About a month went by, I never got any confirmation or anything saying look out for a tracking number so I reached out to her via Instagram direct message," she said. “She said, ‘Just give me some time so I can catch up on the back orders.’ I let another month go by, reached back out to her. She said the same thing.”

Williams also sent emails about her order. The owner emailed back saying, “I would like to personally apologize for your inconvenience. I accept full responsibility for the mistake and I assure you that I am taking the necessary steps to prevent it." She said she wasn’t prepared for a sudden influx of orders and was making improvements like hiring customer service reps and creating an email support system.

Still, after more than three months, Williams said she never received her order and lost around $400.

“Since we have a mutual friend I didn’t want to cause any tension between us. I just let it go," Williams said.

But then this year, Williams was scrolling through her phone when she came across a post from Alicia Taylor talking about the same Instagram account she tried to buy from all those years ago.

“It’s feminine clothing and she also advertises she sells it to celebrities and everything. Makes you think it would be a good business," said Taylor, who lives in Memphis.

Taylor is talking about pictures on the 1of1sbyJolie account that show celebrities like Cardi B in the custom clothing. 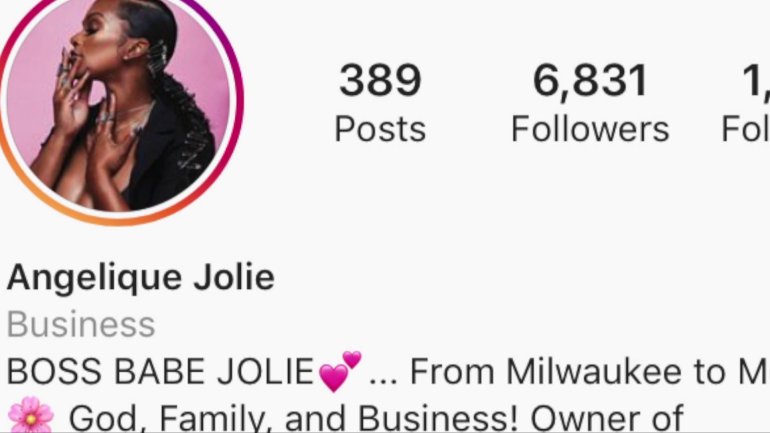 Both she and Lauren Williams saw the images on social media and placed orders, Taylor in April of 2019 and Williams in August of 2018.

But remember those promises to Keneesha Williams that the retailer would make changes after the ordering issues five years ago? It doesn’t look like that happened.

In fact, both women say they placed orders via Instagram message and paid through Cash App.

“I asked her if she had PayPal. She didn’t have PayPal. She said she had just closed out her PayPal account like the day before," Lauren Williams said.

Lauren Williams said it took two months for her order of ripped jeans and a trench coat to arrive.

"The jeans were too small and the jacket was a men's jacket. But I noticed the items were not new items. They were kind of resale items or thrifted items that had been worn before," she said.

Taylor's jeans arrived in both the wrong size and color.

1of1sbyjolie offered to send both women corrected items, but they say that’s when the real frustration began.

They tell stories eerily similar to what Keneesha Williams experienced in 2014.

Alicia Taylor showed copies of her messages  with the owner. She repeatedly asked for shipping updates but never got a straight answer. Two different times, Angelique sent a picture of a tracking number with her finger blocking part of it.

"I reached out to some friends to say, ‘Hey do you know Angelique?’ because she went to University of Memphis. I said, ‘Yeah, well have you ever ordered anything from her and did you get the product?’ That’s when found out several people order from her, never got the order,” Taylor said.

WREG took the concerns to the officials with the Better Business Bureau of the Mid-South. Spokesperson Nancy Crawford said they actually got their first complaint about 1of1sby Jolie in October of last year. Since then, there have been at least eight more complaints. The company also has an F rating with the BBB.

“She has multiple unanswered complaints where she didn’t respond to our request to address the issues. We spoke to her by phone where she said she was going to refund money to the customers but we had not had a chance to verify," Crawford said.

WREG asked Crawford if the BBB would call this a scam.

“It may be. We at this point don’t know," Crawford said.

We also wanted to speak with Angelique Walker, who operates 1of1sbyJolie.

The BBB provided us with a phone number. We called it and left a message.

Then, a customer gave us a home address she provided to mail back a faulty product.

We went there multiple times to try to speak with the owner. No one came to the door the first two times but then on our third visit, someone entered the garage.

We asked for Angelique.

We asked if he could you answer some questions for some of her customers. He said to hold on one second, and then when he came back out, he closed the garage door on us.

The very next day, Angelique posted a video in her Instagram story.

“I’m pretty much playing catch-up y’all. I’m not gonna even lie," she said in the video.

She apologized, explained they had a bad shipment of fabric and then told a story that probably sounds familiar: she wants to hire help.

“I’m all about growing a big team and I can finally say, ‘Hey I can’t do it. I can’t do all this [stuff] by myself. It’s impossible. I tried literally," she said in the video.

"All red flags," said Crawford with the BBB.

She called it a textbook case of issues with shopping in the social media era, including orders via direct messaging and payment through an app.

“You have to really do your background research before you place that order," she said. “With cash, when it’s gone it’s gone. It’s just like handing cash to somebody. So the Cash App is doing exactly that."

She also said according to the Federal Trade Commission, online retailers should be able to deliver within 30 days or provide an option to refund.

It also directed people to order only by email, which should've also raised red flags for customers when they placed orders via direct message.

To avoid these issues, BBB officials advised people should always search a business name online, coupled with the word “complaints” and "reviews." They also said make sure any business has a physical address and a working phone number. And when paying for products, use a credit card if possible because it’s the only way you’ll have protection.

“I’m taking care of your kids and my kids over here are suffering. No. I can’t,” Keneesha Williams said.

The Better Business Bureau said officials had been in contact with Walker but she recently stopped responding. They said since WREG started investigating this story, they've taken two additional complaints about the business.

They advised customers to file a claim in small claims court as their best chance for recourse.

A Canadian airline jet made an emergency landing at Memphis International Airport after reports of smoke in the cabin.

Sunwing Airlines flight 596 was traveling from Cancun, Mexico to Calgary, Alberta on when it was diverted Tuesday night.

SMU is 15-1 at Moody Coliseum this season and jumped out to a 32-20 halftime lead. Memphis was 9-for-30 shooting in the first half, 1-for-10 from beyond the arc while turning the ball over 10 times.

Over 1,300 complaints were sent to the FCC about Shakira and J.Lo’s Super Bowl halftime show

Downtown, once one of the safest zip codes in Memphis, sees increase in crime

Shots fired at FedEx driver on I-40

Over 1,300 complaints were sent to the FCC about Shakira and J.Lo’s Super Bowl halftime show