MEMPHIS, Tenn. — A woman became irate outside a southwest Memphis convenience store and vandalized a car.

Even customers were shocked by the video of a woman picking up a large brick next to the Royal King convenience store on West Raines Road and tossing it as hard as she could onto the hood of the clerk's car.

The brick cracked the windshield and dented the hood of the 2017 Camry.

The owner of the car said it was all over some spilled drinks. He said the woman responsible is Tina Gales.

The clerk behind the counter told police he accidentally dropped Gales' bags and shattered her drinks. He said he offered to replace the drinks and told her to hand him the broken glass, and that's when she spit at him and when things in the store started flying. 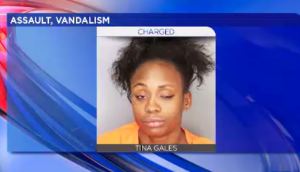 In another video provided to WREG by store employees, you can see a woman spitting at the clerk. The clerk threw a full plastic drink bottle at her, and she threw it back at him.

In the video, another employee comes from behind the counter and escorts her out the store, but she comes back inside.

Employees said after they saw Gales damage the car, they called her mother and then police.

The 26-year-old is now charged with vandalism and assault.

Employees told police they gave Gales a refund before making her leave the store.

The owner of the car said she did about $1,800 worth of damage to his vehicle.

MEMPHIS, Tenn. -- Governor Bill Lee will give an update on the state's efforts in the ongoing COVID-19 pandemic.

MEMPHIS, Tenn. --- As the coronavirus cases continue to rise in Memphis and across the country it also means more potential health risk for first responders.

MEMPHIS, Tenn. — Mississippi Governor Tate Reeves plans update the state about unemployment after claims increased more than 8,000% due to COVID-19.

Wednesday's press conference begins at 2:30 p.m. WREG will stream it below and on our Facebook page.