These cases come on the heels of outbreaks in New York City, California and Washington state, but doctors say there are steps you can take to protect your family.

The Centers for Disease Control say 555 people have already gotten measles this year. That’s the most this decade, except for 2014.

“I’ve only heard about people wondering why all the sudden it’s come up again,” said Tequa Killebrew, who says she’s seen a lot of posts about it on social media.

Dr. John DeVincenzo, an infectious disease specialist with Le Bonheur Children’s Hospital, attributed the rise to global travel, as well as people and parents who’ve chosen not to vaccinate.

“Vaccine rates for measles in certain pockets of the U.S. are not good enough,” DeVincenzo said.

He said the disease usually travels to the U.S. In people coming from other countries. It puts the most vulnerable people here at risk, especially those who can’t get the vaccine, such as newborn babies.

Children are supposed to get their first measles vaccine when they’re 12 to 15 months old. Until then, they’re unprotected.

“You’ve got at least 4 million or more children in the U.S. that are completely susceptible to measles, and those kids need to be protected against measles by the rest of us doing our non-selfish duty to get vaccinated,” DeVincenzo said.

For people who travel, make sure to check vaccinations two months before leaving. Some vaccines need that long to work. And some, like the measles vaccine, need a second dose.

If you’re an adult, and had a measles vaccination only once as a baby, it’s not enough. Everyone needs a second dose of the vaccine, often called a booster.

Even though Killebrew supports vaccines, that’s something she didn’t realize..

“With kids they should be,” she said. “But as you grow older I never saw the need for it.”

She says with a grandchild on the way, she’ll be doing a lot more research. 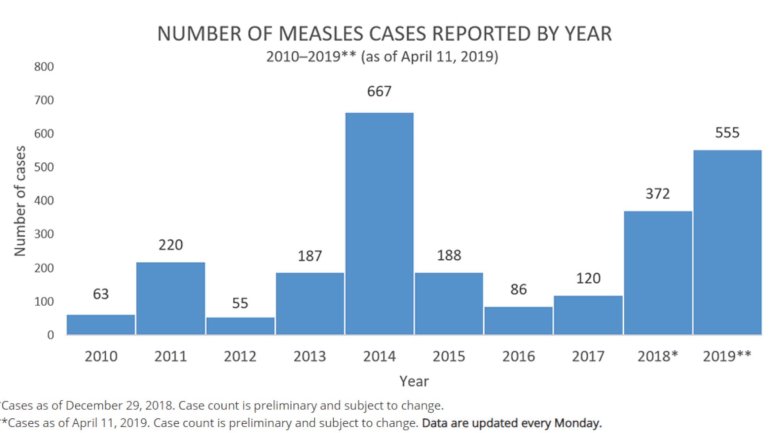 If you were born before 1957, you should be in the clear. You’re considered immune.

You can also find out if you already have immunity by getting a blood test at the doctor. But if you don’t like needles, you might want to skip that and just an extra vaccine either way.

If you have more questions, call the Tennessee Department of Health’s measles hotline at (865) 549-5343. The lines are open this weekend.

Silverfield happy with the high number of new faces …