MEMPHIS, Tenn. — The wait was over Wednesday as the 2019 Beale Street Music Festival lineup was announced, but for the 2020 festival, the future is far from certain.

Renovations planned for the festival’s home, Tom Lee Park, are expected to improve the festival overall in the long term, but that could come at a cost to the 2020 festival, as construction is expected to last until the end of 2020.

Robert Griffin, director of marketing for Memphis in May, said they have asked for the construction process to be phased in order to have enough of it completed to host the festival there in 2020. But if construction can’t be sped up, a new location will be needed to host the roughly 30,000 people who come each day of the three-day weekend music festival. 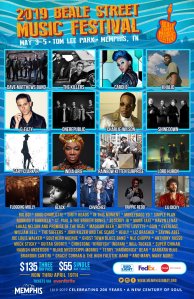 “If is not (completed before the 2020 festival), we’ve been told … that the Downtown Memphis Commission has located a couple of different sites that they propose us to use for our events, but we haven’t had a meeting with them yet,” Griffin said.

He said their goal is to keep the festival downtown, but they do not know the possible locations yet.

Griffin said Memphis in May requested their architect look over the proposed construction plans, but they are not done with that, so he does not know the true impact the redesign will have on the festivities yet. The architect should be finished with the review by next week.

“If we’re not in Tom Lee Park (for 2020), Memphis in May would be impacted, just because it’s a new location, a new site,” Griffin said.

Griffin said he is excited that the infrastructure in the plan seems to benefit Memphis in May.

The changes seem to benefit the festival because the festival was the first focus of the design and the first step of the planning, according to George Abbott, director of external affairs for the Memphis River Parks Partnership, the organization overseeing the redesign.

“Before we even started the design, we wanted to make sure we knew what Memphis in May needed,” Abbott said. “The design … meets or exceeds all of the specifications that were required.”

He said the square footage for stages during Music Fest will be increased, and the grass will be a type that will not get torn up easily and can regrow easily after the festival, among other improvements.

Abbott said they are investigating the phased construction schedule requested by Memphis in May, but he does not think it is likely they can finish everything before May 2020.

“If we wanted to start construction tomorrow, we couldn’t because we’re not there yet,” Abbott said. “We won’t know the construction schedule until we get further down the line with construction drawings to see if a phased schedule makes sense.”

Abbott said he knows all involved, including the City of Memphis, are “committed” to finding a way for the festival to stay downtown in 2020.

“Let’s work together to find a solution to keep the festival downtown,” he said.

MARYVILLE, Tenn. (NEXSTAR) – Two women were caught trying to spend a fake $1 million bill at a Tennessee Dollar General store earlier this month, according to The Daily Times.

An employee of the discount store in Marysville reported April 5 that the women tried to use the counterfeit fortune to purchase several gift cards.

MEMPHIS, Tenn. – The Malco Majestic in Hickory Hill is being sold, and what's coming soon will be more than just movies.

Malco Majestic was put up for sale just as film producer Marie Pizano was looking for space to start a movie production studio.

TUNICA CO., Miss. – Tunica County officials worried about the low number of people vaccinated against COVID-19 say they are making a huge effort to turn numbers around.

St. Patrick’s parade returning to Beale Street in May instead of March this year

Can my employer legally ask if I received the COVID-19 vaccine?

St. Patrick’s parade returning to Beale Street in May instead of March this year