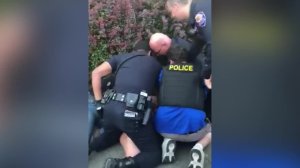 A recent arrest is gaining wide spread attention after it was posted to social media over the weekend.

According to CNN affiliate KAEF-TV, officers at Humboldt State University made a traffic stop after they witnessed someone hanging out of a sunroof while driving down the street. They pulled the car over and arrested the individual.

The video that was posted to social media started after that point.

“What other information can we have?” asked Alonso Luna.

“That’s it, that’s all you need,” replied the officer.

“That’s all the information?”

“Yes, what other information do you think you need?”

“Why are you being so rude?”

“You’re the one who’s being rude.”

“Seriously? You’re about two minutes from going to jail for public intoxication. Do you not understand that? So I would stop talking if I were you,” the officer said.  “When I asked your last name then you should have told me Alonso Luna.”

“What’s on your license?”

“And that’s what you should have told me.”

“My last name is Luna. You know what? My dad isn’t my actual dad.”

“You are going to jail.”

“You’re going to jail. You don’t get to resist.”

“Let go of my hair,” the officer screamed.

The scuffle ended with the woman on the ground, still grabbing the officer’s hair.

“No!” the suspect screamed.

“So they were out working and they observed a vehicle driving in Arcata with a person hanging out through an open sunroof and I don’t want to assume, but that’s definitely not okay. It’s a dangerous situation, so that’s what drew their attention, and when they conducted a traffic stop based upon that, it did appear that several of the occupants of the vehicle were intoxicated and underage. Beyond that, we’re still investigating this, and I really don’t want to say too much more. Obviously, there’s been a lot of social media attention. I’m aware of that. I’ve watched the videos. There’s other videos that I’ve watched as well, not the ones that were released on social media. And so, you know my part here is to do a fair and objective analysis of everything that occurred.”

“I think that right now though, at this stage, it’s just way too soon to – what I would say is the video that’s posted on social media – the one that I saw – started quite a long ways after the incident began, so it’s not inclusive of everything. And I think to judge one way or the other would be completely inappropriate at this point.”

Church prepares to celebrate the life of Tyre Nichols

FedEx to lay off 10% of global officers, directors

5-year-old dies after being shot in Parkway Village, …

Witness from inside White Station library

FedEx to lay off 10% of global officers, directors