MEMPHIS, Tenn. — So far this year, one driver is being carjacked on average every day in Memphis. It's a violent crime that victims say haunt them for years to come.

Carjackings have become all too familiar in Memphis. Each story is hard to hear.

"It was in my face," Devon Hampton said. "I could see the barrel. There was nothing else I could do."

Hampton was driving in a tunnel on Southern and Hollywood on Jan. 3 when he said three men surrounded his minivan. He said he hopped out of the car and ran to safety.

When he finally got home, he hugged his children. 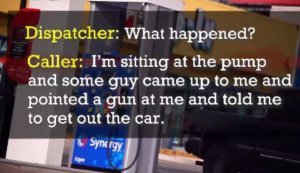 "The first thing that came to my head was my kids," he said. "I was like, I’m not going to lose my life over a vehicle that can be replaced."

Hampton's carjacking is one of 34 so far this year in Memphis.

While he didn't get into specifics, data we uncovered supported his statement.

MPD's crime tracker shows 299 carjackings reported last year, which is down from 2018 but still higher than previous years.

"Our violent crimes unit has done a great job arresting and apprehending individuals who choose to do carjackings, and there’s a lot going on on the federal side as far as prosecution," Rallings said. 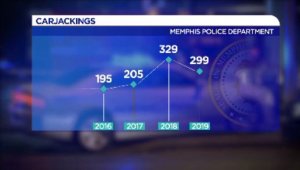 But concerns remain, especially when you hear the stories behind the stats.

Some crimes happened in the middle of the day in busy areas while children were just feet away.

In recent months, two armed men reportedly carjacked a Rhodes College student behind a home on University Street. Weeks later, a woman told police a 12-year-old with a gun tried to carjack her in East Memphis. Days after that, police said two men tried to carjack a Le Bonheur employee and shot her not far from the hospital.

Thankfully, the victims we've mentioned will all physically be okay.

But Pastor Ricky Floyd said healing mentally will take time. He was carjacked while putting air in his tire at a busy gas station in South Memphis in 2016.

"The immediate response was to try to grab him and snatch him out of the car, which he grabbed the door and sped off. I flipped over like a tumble weed in the parking lot," he said.

He said that day changed him.

"After it happened to me, there was a sense of insecurity," Floyd said.

In 2018, WREG was there when Floyd met the man who admitted to carjacking him and watched as he turned himself into police. Floyd said it helped him forgive but not forget.

"I'm very aware of my sight and surroundings," he said. "Even when I'm with my wife and I go into the store, I make sure she locks the door."

In most carjackings, the violence unfolds within seconds, but those seconds haunt the victims for a long time after the crime.

(CNN) -- Federal officials on Friday ordered airlines to reimburse customers for canceled flights, saying a growing number of passengers are complaining amid the coronavirus pandemic that airlines are providing travel credits rather than refunds.

The US Department of Transportation did not say how many claims it has substantiated, but it did direct carriers in an enforcement notice "that passengers should be refunded promptly when their scheduled flights are cancelled or significantly delayed."

MEMPHIS, Tenn. — Two major retailers are enforcing new rules to encourage social distancing within their stores due to the novel coronavirus pandemic.

Both Walmart and Target introduced new measures to fight the spread of the virus.

MEMPHIS, Tenn. – A suspected drunk driver accused of hitting as many as four cars in a series of crashes Friday evening was eventually stopped thanks to the acts of a Good Samaritan, WREG has learned.

Mark Purifoy says he witnessed one of the crashes around 6:30 p.m. at the corner of Summer and Highland.

Coronavirus case count: At least 3,067 cases confirmed in Tennessee; 1358 in Mississippi; 743 in Arkansas