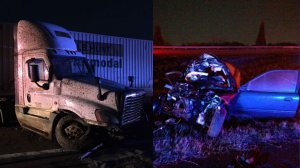 WREG has learned two cars and an 18-wheeler where all involved in the crash, which was reported around 4:40 a.m.

Initial reports indicate a Honda Civic was traveling eastbound when it ran into the back of a SUV. The driver of the Civic lost control and went across the median into the westbound lanes.

An 18-wheeler traveling westbound tried to avoid the car and fish-tailed on the interstate.

The Civic sustained severe damage, resulting in first responders having to cut the driver from the vehicle. They were rushed to the Regional Medical Center in critical condition.

It appears no one else was seriously injured in the accident.

Crews had the debris cleaned up and the lanes back open by 9:30 a.m.

WASHINGTON -- Supreme Court Justice Ruth Bader Ginsburg, a diminutive yet towering women’s rights champion who became the court’s second female justice, died Friday at her home in Washington. She was 87.

MEMPHIS, Tenn. -- Local teachers and their unions say they're frustrated with virtual classes, with many saying the classes just aren't working.

"It's a very unsettling time, very difficult from anything we have ever experienced before," said Keith Williams with the Memphis-Shelby County Education Association.

MEMPHIS, Tenn. -- We're more than six months into the coronavirus pandemic, and there's still a lot that we don't know – and even more that we don't understand. That includes the data that's designed to help us analyze how serious the disease is and how we're doing at fighting it.

Some say the data can be mind-boggling. For instance, two charts from the health department seem to show the positivity rate from the same week but with different numbers.

UPDATE: One arrested after deadly shooting on Appling Road in Cordova