Cole had driven for the school system for five years. When he just started his route Tuesday morning and only had eight children on board, he appeared to have suffered a heart attack, and his bus ran off Highway 72 and rolled over on its side.

Several children are in the hospital recovering, but luckily none have life-threatening injuries. One of those children was Cole’s granddaughter.

Those close to Cole are still grieving and said he loved his job and the children he saw every day.

“Those kids were his pride and joy,” Cole’s stepson Shanneth Walls said.

It’s believed Cole suffered a heart attack, causing him to lose control of the bus and sending it off the highway and onto its side.

Walls said Cole’s granddaughter, who was on the bus, knew something was wrong right before the crash.

“And she sits kind of close to ‘paw-paw’ because she’s the grand-baby—his favorite,” Walls said. “And she says she seen ‘paw paw’ shaking, trembling. Something was behind that.”

The young girl was not injured. 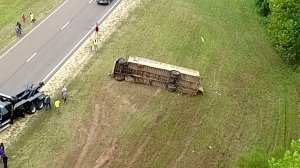 After a closer look at the damaged bus with seat cushions tossed about, broken windows and a crumpled roof, it’s hard to believe the young students survived the rollover.

Cole was considered a dependable driver and hard-working man by the school district superintendent.

Walls said he’ll miss his step-father, who he said always made sure the number 20 school bus was a welcomed sight, even on the coldest winter days.

“I’d hear that school bus ‘fire’ up,” Walls said. “He’d let it warm up good and toasty for the kids. And when he’d get on the scene, they’d be glad to get on the bus.”

MEMPHIS, Tenn. — The Memphis Police Department confirms it is investigating one of its officers after it emerged he sent unsolicited text messages to several women.

In one message, he claims to have previously pulled the woman over for speeding, but she tells WREG this wasn't the case.

MEMPHIS, Tenn. — Shelby County residents were able to drink at bars again Wednesday. Health officials say they are allowing bars to reopen because the infection curve is starting to flatten. Customers at The Silly Goose on Peabody Place were thrilled to be in a bar again.

"Nice to sit down, come back to a bar that you're familiar with," Alexis Sullivan said.

MEMPHIS, Tenn. — A recent completed report by the Tennessee Department of Education has revealed some disturbing trends are getting worse, and “at-risk students” may be in danger of falling through the cracks and missing an education.

Schools and students are struggling to adapt to COVID-19 across the state, but new stats show that Shelby County Schools might be even more at risk to COVID-related challenges, creating issues that could affect some students for the rest of their lives.

2 officers shot in Louisville during protests, expected to recover

2 officers shot in Louisville during protests, expected to recover