NOTE: If video doesn’t open for you, click here.

PARIS (AP) — A massive fire engulfed the roof of Notre Dame Cathedral in the heart of the French capital Monday, toppling its spire and sending thick plumes of smoke high into the blue sky as tourists and Parisians looked on aghast from the streets below.

A spokesman said the entire wooden frame of the cathedral would likely come down, and that the vault of the edifice could be threatened too.

“Everything is burning, nothing will remain from the frame,” Notre Dame spokesman Andre Finot told French media. The 12th-century cathedral is home to incalculable works of art and is one of the world’s most famous tourist attractions.

The cause of the catastrophic blaze was not known, but French media quoted the Paris fire brigade as saying the fire is “potentially linked” to a 6 million-euro ($6.8 million) renovation project on the church’s spire and its 250 tons of lead. Paris police said there were no reported deaths.

Flames shot out of the roof behind the nave of the cathedral, among the most visited landmarks in the world. Sights of the flames stopped passers-by in their tracks along the Seine River that passes beneath the cathedral.

French President Emmanuel Macron postponed a televised speech to the nation because of the stunning blaze and was going to the cathedral himself. 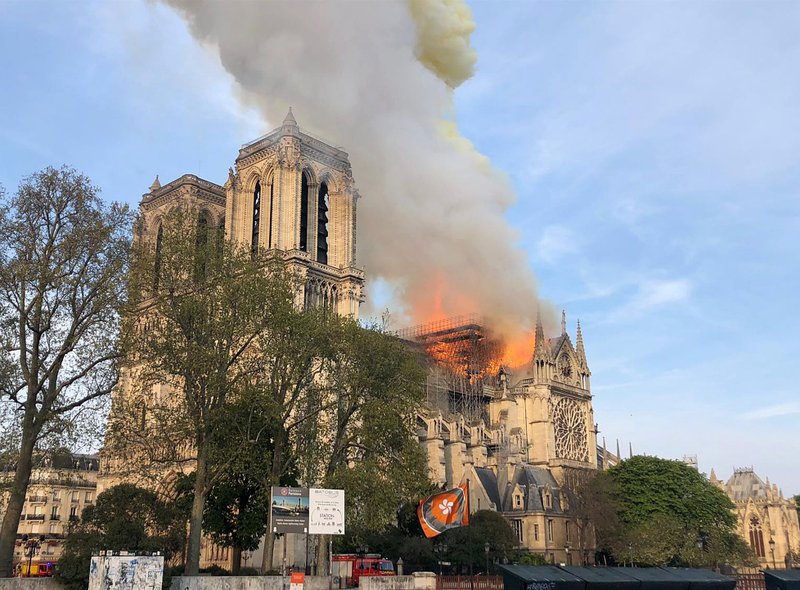 “It’s been 800 years that the Cathedral watches over Paris”, Pascal said. “Happy and unfortunate events for centuries have been marked by the bells of Notre Dame.”

“We can be only horrified by what we see”, Pascal said.

Associated Press reporters at the scene saw massive plumes of yellow brown smoke filling the air above the Cathedral and ash falling on the island that houses Notre Dame and marks the center of Paris.

Paris Mayor Anne Hidalgo is in despair at the “terrible fire.” Hidalgo said in a Twitter message that Paris firefighters are still trying to limit the fire and urged Paris citizens to respect the security perimeter that has been set around the cathedral.

Hidalgo said Paris authorities are in touch with Paris diocese.

Here’s the moment the spire of the Notre Dame cathedral collapsed.

A massive fire is burning the iconic Catholic landmark in Paris.

WASHINGTON — Senate Republicans are significantly ramping up their investigations into the FBI's Russia probe with a pair of committee votes that will give the GOP committee chairmen broad subpoena power to haul in officials from the Obama administration.

The Senate Judiciary and Homeland Security and Governmental Affairs committees will vote to authorize subpoenas in the separate Republican-led probes into the actions of the FBI, the Justice Department and Obama administration officials surrounding the FBI's Russia investigation, the prosecution of Trump's associates and the appointment of former special counsel Robert Mueller.

NASHVILLE, Tenn. — A Tennessee judge says the state’s guidance about who can vote by mail due to the coronavirus is “very ambiguous” and there's “weighty proof” that other states have expanded to let all voters cast absentee ballots this year.

MINNEAPOLIS (AP) — Demonstrations in cities across the U.S. to condemn racism and police abuses remained large but turned notably more subdued on the eve of a Thursday memorial service for George Floyd that kicks off a series of events to mourn the man whose death empowered a national movement.

The calmer protests came on the same day that prosecutors charged three more police officers and filed a new, tougher charge against the officer at the center of the case.