MEMPHIS, Tenn. — A Mid-South school has shut its doors after it was reportedly denied funding from the Department of Education.

WREG received a call from several upset students Monday morning saying The Barber School had unexpectedly closed its doors. When they arrived at school this morning, they were met by locked doors and a note on the door telling them of the decision.

According to the note, the agency denied financial aid coverage to the school, forcing The Barber School to close all three locations in Memphis and Jackson, Tennessee. 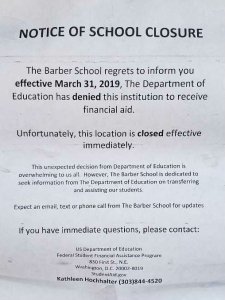 “Today being April 1, I thought it was a joke. I like to joke, but it wasn’t,” barber student Bobby Lewis said. “I think that maybe if I had a warning I could have prepared, but nine hours notice is kind of short.”

Some of the school’s students were right on the brink of finishing. “We have students within 30 hours, 20  hours, 100 to graduate,” Lewis said.

Many students say they’re in the dark on how things got to this point. “I’m feeling like they mishandled some money, scammed a lot of people out of their money,” barber student Billy McKinney said. He says every single student was on the right path, and trying to do the right thing. Now, he doesn’t know what they’ll turn to. “It’s futures at stake. It’s livelihoods at stake. It’s real life that’s at stake.”

In 2014, WREG’s Zaneta Lowe reported on the school’s high loan default rates, which put it in danger of losing its eligibility to participate in federal student loan programs.

The US Department of Education released the latest data, and the Memphis Institute of Barbering, also known as the Barber School, was one of several subject to sanctions because its three-year, cohort loan default rate is above 40 percent.

To read Lowe’s full article on the funding issue from 2014, click here.

MEMPHIS, Tenn. -- A man was reportedly injured in a shooting in Orange Mound Friday night.

Police say the shooting happened just after 9 a.m. in the area of Golden Avenue & Harrison Street. The victim is critical condition.

The Shelby County Health Department says 11,424 people have tested positive for coronavirus in the county.