MEMPHIS, Tenn. — Fear and frustration are mounting for people living at an apartment complex in Whitehaven.

The Peppertree Apartments complex has racked up thousands of calls to code enforcement and police in the past few years.

“It’s real violent over there,” said Shaneque Willis. “If I’m not walking in a group with them, I’m walking with my strap.”

She moved into the complex on Graceland Drive last November.

“I figured that I wouldn’t have any issues, because the way they presented themselves when they filled out the paperwork,” she said.

But she quickly regretted it when the problems piled up at her place.

Willis took pictures to show us since we weren’t allowed on the property. She said the pictures show her bathroom caving in, and a rat on her kitchen counter. She said it’s one of many rodents in her apartment, and believes it’s due to giant trash piles throughout the complex from tenants not cleaning up or being evicted.

“I have seen homeless shelters better than what they be doing,” said another tenant, Inesha Sawyer.

It’s just one of at least 100 calls Memphis Code Enforcement received in the past two years for things like broken AC, rats, bugs, molds, leaky ceilings and fire damage.

Some issues were repaired, but other complaints that were filed months ago aren’t fixed.

“It’s very stressful and depressing. The fact the government gives you these funds to provide these living situations for these people, you know, it’s not the best,” said Sawyer.

Safety is also a major concern at Peppertree.

WREG found out Memphis Police were called to the complex around 1,600 times in the past two years for things like shootings, theft and domestic violence. Already in 2019 there have been more than 400 calls (see graphic below). 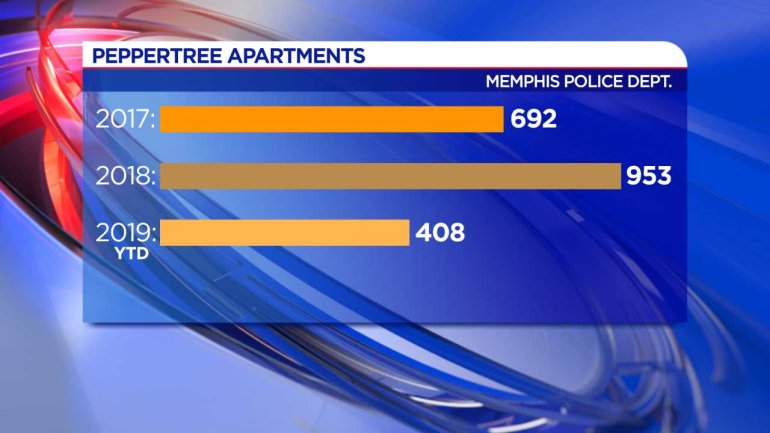 A spokesperson for the Memphis Police Department said they added SkyCop Cameras and more patrols, but since 2017, crime hasn’t drastically changed. This year is no different.

But 2015 may have been the worst in recent years. Officers were called to the complex more than 1,000 times.

It was around that time, some city leaders demanded Peppertree be demolished while lawmakers asked the feds to investigate.

The property owners, Tesco, promised change back then and teamed up with SafeWays, a non-profit working to make apartments safer through environmental design.

Janine Heiner heads Safeways and said she saw improvements during that time.

She worked with the owners to get better lighting and fence, but the improvements didn’t last.

“With that being Project-8 Section property with a limited cash flow, it’s very difficult to find the resources necessary to make all the changes they need,” she said.

Less than a year and a half later, Peppertree stopped working with SafeWays.

Shelby County District Attorney Amy Weirich told us that was discouraging to hear.

It was declared a public nuisance in 2006, but Weirich said it’s tough to do that again. She continues to monitor the complex.

“It’s easy to say, ‘Hey DA, why don’t you shut them down?’ But it’s a total different conversation to say what do we do with the people who live there? Where do we put them? Where do they go?” she said.

So tenants will continue to live in a place they say was designed for criminals with crawl spaces, ample hiding spots and pathways that are pitch black when not properly lit.

“It’s like the video game like Call of Duty. You could hide right here, and no one would see you. You could snipe this person off. You’d just be dead,” said Sawyer.

“I just worry that there are developments going up right now, or in the planning stages right now, that we are going to find ourselves in this position five, six years from now going, ‘How do we fix this problem that shouldn’t have ben created in the first place when this was built?'” said Heiner.

WREG reached out to Peppertree’s owners to get a comment, but never heard back.

A spokeswoman with the U.S. Department of Housing and Urban Development told WREG they last inspected Peppertree  in mid-May. They gave the complex a score of 70, which isn’t failing but requires HUD to inspect the place the following year.

HUD asks tenants reach out if they feel issues aren’t being resolved.

For Peppertree Apartments, the contract administrator is Tennessee Housing Development Agency. The tenant complaint line is 800-314-9320 and email is Section8residentcomplaints@thda.org.

MEMPHIS, Tenn. -- Friends say a Memphis rapper was one of two people killed in a shooting outside the Valero gas station at Knight Arnold and South Mendenhall Wednesday night.

In a unanimous vote Thursday night, the council approved the purchase of 25 cameras for $91,000. Captain Joel Johnson says that's enough cameras to cover each on-duty shift.

(NEXSTAR) – The Federal Emergency Management Agency was inundated with calls after opening the hotline to its COVID-19-related funeral assistance program.

FEMA said in a news release that the more than 1 million calls were too much for the agency's call centers and caused technical issues Monday. The flood of calls came in within the first 90 minutes that the hotline was open, CNN reports.

MPD: One found shot to death in Frayser