MEMPHIS, Tenn. — Two people were arrested on Wednesday after a man was kidnapped and tortured inside a home near Reese and Appling last week.

The victim said he was on his way to work early Friday morning when a Ford Taurus with flashing blue lights and a city of Memphis-issued government tag pulled up behind him. Two men wearing “Police” vests and armed with guns jumped out of the vehicle and ordered him to the ground, he said.

The victim told police he recognized one of the men as Anthony Davis. The two had reportedly been arrested and served time in federal prison together.

After patting him down and grabbing his keys, the victim said the suspects handcuffed him, placed a black mask over his head and threw him in the back of their car. He was then taken to a home on Reese Road where he was reportedly tortured by his captors.

According to police, the man sustained second- and third-degree burns to his neck, face, legs and arms. They beat him numerous times and at one point even threatened to retrieve pliers and a saw to cut off the man’s fingers and toes.

When he yelled out in pain, the suspects reportedly burned him even more telling him not to scream again. 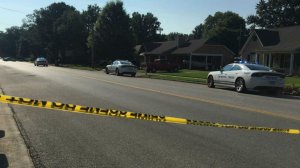 All the while, they yelled at him, asking “Where is the money?”

The victim told police he eventually broke down and told them he had a storage unit located on Millbranch. He gave them the code and two of them left the home. The suspects were later caught on camera using the victim’s code to get into the  unit.

Police didn’t say whether they found what they were looking for.

The victim eventually escaped from the home by diving head-first out of a window while still handcuffed and with the mask still over his head. A passing driver saw the victim rolling in the street and flagged down police.

He was immediately taken to the burn unit at the Regional Medical Center.

Davis was eventually taken into custody late Wednesday evening. A second suspect, Yolanda Martin, was taken into custody several hours later at an apartment on Round Rock Lane.  Police said Martin rented the Ford Taurus and then reported it stolen shortly after it was used in the kidnapping.

The second male who was involved in the kidnapping has not been identified.

The governor said all of the populations covered in the state’s Phase 1-B groups would be eligible for vaccinations as of Monday, an increase of 180,000 state residents.

Daylight Saving Time is almost here. At 2 a.m. on Sunday, March 14, you will need to set your clocks one hour ahead.

With the annual change, sunlight will extend longer into the evening, but the shine will take longer to emerge in the morning.

LOUISVILLE, Ky. (AP) — A judge in Kentucky has signed an order permanently closing a criminal case against Breonna Taylor’s boyfriend.

Stocks rise broadly on Wall Street even as technology lags

Nearly 100 pet dogs and cats have contracted COVID-19. Here’s how to protect your pets

Allergies or COVID-19? How to tell the difference

Killer wanted after man in wheelchair shot to death in Cordova

Forging ahead: Some sea slugs grow new bodies after decapitation

Minneapolis prepares for possible unrest as Chauvin goes on trial

Stocks rise broadly on Wall Street even as technology lags