SHELBY COUNTY, Tenn. — After her father was brutally murdered, Laquita Hughes applied to a state fund that helps crime victims’ families with the expense that can come with medical bills, funerals and other costs.

But after waiting weeks for relief with thousands of dollars in bills piling up, she began wondering if she would get any help at all.

“It’s starting to make me wonder, is this a scam? They say they are going to help and then they don’t,” Hughes said.

WREG did some digging and found that, although millions of dollars go to victims’ families each year, not everyone who puts in a claim receives help.

Oct. 15, 2018 felt surreal, Hughes said. It was the day her father Wesley Johnson was found on his couch, stabbed to death in a domestic dispute.

On top of trying to grasp what happened, Hughes said she and her sister faced a financial hardship. They borrowed and begged for money to pay for their father’s funeral. They had to do it quickly too, since holding a body comes with a charge.

“It was a total, plus storage fees and everything, about $4,500, because we had to put all of his things in storage,” she said.

Hughes, hoping to get some of that money back, applied for the state’s program called the Criminal Injuries Compensation Fund.

Basically, the fund does what its name says. It helps compensate crime victims or victims’ loved ones with things like medical bills, counseling and even helps with funeral and burials up to $6,000.

The fund comes from offenders’ fines and fees.

There are some rules attached: The crime had to have happened in Tennessee and reported within 48 hours, the claim had to be filed within the year and the victims have to be innocent, meaning no criminal activity to cause their demise.

Hughes said her sister tried to apply, but was denied with no explanation.

So she gave it a shot and sent in an application in August. It’s still pending.

In the fiscal year 2019, the state says more than 2,400 people applied for some kind of compensation. About 1,500 were approved. 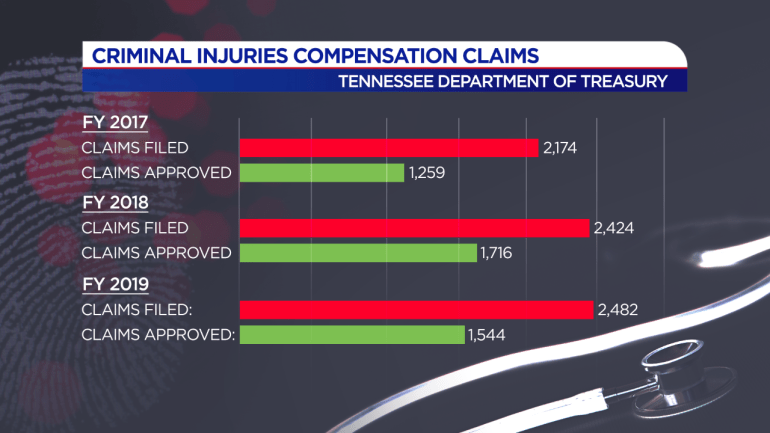 The state handed out $8.5 million, although some of that money may have come from past claims. 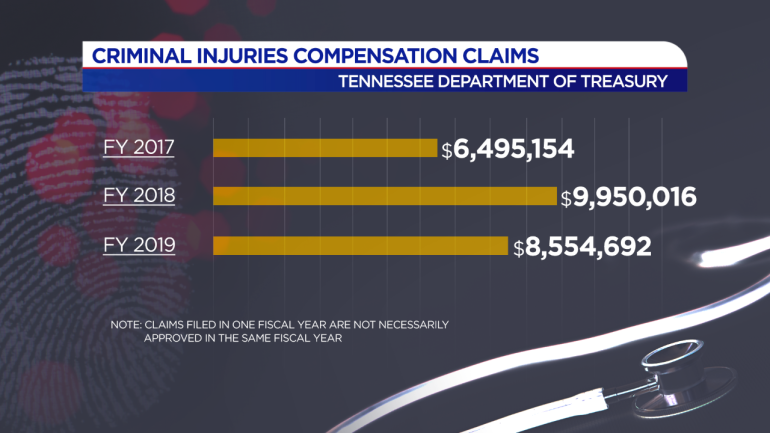 $3.5 million went to Shelby County. 831 people applied 535 were approved. There were similar trends for the past couple of years. 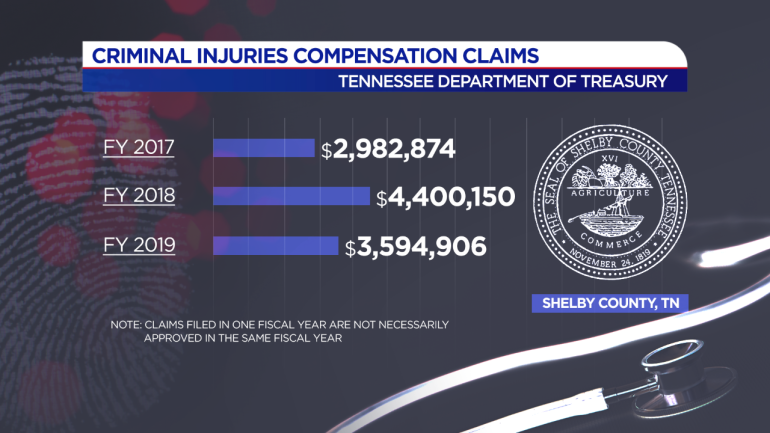 “My victim’s compensation specialist sees over 550 victims last year alone. That’s one person. All of our crime advocates help victims apply for compensation,” said Sandy Bromley, director of the Shelby County Crime Victims Center, where her team offers support to those impacted by violent crime.

“Grief and trauma shuts down our brain, and it’s really difficult to make some basic decisions. We want to make sure folks know we are here to walk them through this process,” she said.

That last part, she said, is vital, especially before the spending starts.

Bromley said the families or the victims have to come up with the money first and then hope for reimbursement.

Hughes said her hope is fading.

“We haven’t been able to afford to pay for his headstone,” she said. “I wish I wasn’t going through this. Wish I still had him.”

She hopes to get her father a headstone by his birthday in January.

Her father’s alleged killer has yet to go to trial.

You can find more information and apply for compensation here.

The Shelby County Crime Victims Center said it will walk you through the process free of charge.

The elevated level of applications for jobless aid is occurring as new confirmed cases of coronavirus are spiking across much of the Sunbelt, threatening to weaken the economic recovery. Case counts are rising in 40 states and 22 states have either paused or reversed their efforts to reopen their economies, according to Bank of America.

NASHVILLE, Tenn. — The final decision on whether to remove the bust of a Confederate general from the Tennessee Capitol won't come this year.

Susan McClamroch of the Tennessee Historical Commission says state law allows the panel to begin considering the removal of the Nathan Bedford Forrest bust as soon as the next regularly scheduled meeting in October, then a final vote can follow as early as February 2021.

TERRE HAUTE, Ind. (AP) — The United States on Thursday carried out its second federal execution this week, killing by lethal injection a Kansas man whose lawyers contended he had dementia and was unfit to be executed.

Wesley Ira Purkey was put to death at the Federal Correctional Complex in Terre Haute, Indiana. Purkey was convicted of kidnapping and killing a 16-year-old girl, Jennifer Long, before dismembering, burning and dumping her body in a septic pond. He also was convicted in a state court in Kansas after using a claw hammer to kill an 80-year-old woman who had polio.

Ruth Bader Ginsburg discharged from the hospital and doing well

Man shot, run over by vehicle in Raleigh

Biker wanted after shooting at Southaven restaurant, chase into Memphis

Coronavirus data is funneled away from CDC, sparking worries

Ruth Bader Ginsburg discharged from the hospital and doing well

Man shot, run over by vehicle in Raleigh