NEW YORK — It wasn’t all doom and gloom in 2017. The year was also filled with awe-inspiring moments that united us and warmed the heart.

The first total solar eclipse to cross the U.S. in a century bought millions together in what some could only describe as a primal experience. Thousands of immigrants took the oath of citizenship, realizing their dreams of becoming Americans. And one adorable baby, Fiona the hippopotamus, became a story of survival as she overcame the odds and tumbled into the world’s heart.

The stories provided some lighthearted moments amid a series of deadly mass shootings, terrorist attacks, hurricanes, wildfires, sexual harassment scandals and other tragic news in 2017.

Here’s a look at a few of the moving, unifying and just plain fun moments of 2017:

It seems nothing brought Americans together more than the first total solar eclipse to move across the U.S. in a century.

For one moment in the middle of an August day, millions of people stopped what they were doing and gazed upward in wonder as the moon slipped over the sun — leaving a path of total darkness that stretched from Oregon to South Carolina. Some eclipse watchers sang, some danced and some were moved to tears. Kids thought it was pure magic, and people traveled to remote sections of the country to get the best glimpse.

A study by the University of Michigan, requested by NASA, estimated that 215 million American adults — or 88 percent of the country’s adult population — viewed the eclipse either directly or electronically. That’s 104 million more than the 2017 Super Bowl.

“People were really just about nature, about this phenomenon that was happening,” said Mamta Patel Nagaraja, who works on public engagement for NASA. “It didn’t matter what color, creed, race, economic ladder you were on, people just went out and enjoyed it.

“It transcended all the other things,” she said. 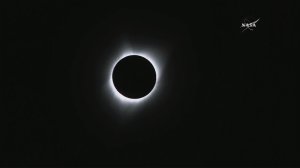 This little one wasn’t expected to make it.

Fiona, a Nile hippopotamus, was just 29 pounds (13 kilograms) when she was born prematurely in January. After early health scares, she’s now thriving at more than 600 pounds (272 kilograms). This sassy girl has become a symbol of survival — and the star attraction at the Cincinnati Zoo & Botanical Garden.

Fiona has captivated the masses and the Team Fiona craze isn’t slowing down. She stars in her own internet video series. Tens of millions have gone online to watch her take a bottle, splash in the pool or learn to run.

T-shirts bear her image. She’s the subject of children’s books. An ice cream flavor and local brew are named in her honor. She gets so many cards and letters that she has her own mail bin. Grown men will lean over the pool in their suits and ties to get close to her, said zoo director Thane Maynard.

In her early, most vulnerable days, Fiona received letters and pictures from kids who were preemies themselves, urging her to stay strong. After nurses at Cincinnati Children’s Hospital Medical Center helped care for the hippo, the zoo sent Fiona-themed onesies to the preemies there.

“We are working with Fiona and her story to spread a number of messages — one is a message of not giving up,” Maynard said.

Out of cash and out of gas on an interstate exit ramp in Philadelphia, Kate McClure found help from an unlikely source: a homeless man who told her to stay put, then used his last $20 to buy her gas.

Johnny Bobbitt Jr.’s selflessness was not lost on McClure. She set up a GoFundMe page for the military veteran and former paramedic, and raised more than $400,000.

Now Bobbitt has enough money to buy a home and his dream truck — a 1999 Ford Ranger. An attorney and financial adviser helped create a plan that will allow him to collect a small monthly salary and have some money for retirement.

Bobbitt has said he’s overwhelmed. He told “Good Morning America” he plans to pay the generosity forward by donating some of the money to organizations that will help others.

“Everybody out there is facing some kind of struggle, so if I can touch their life, the way mine was touched, (it’d be) an amazing feeling,” he told “Good Morning America.”

From a simple proposal over roast chicken to plans for a royal wedding, news that Prince Harry is engaged to American actress Meghan Markle has many cheering.

The story drew people in for many reasons. For one, it’s fun. The happiness exuded by the couple as they announced their engagement was contagious, while details of their courtship read like a fairy tale.

Harry, an army veteran who had a one-time bad-boy image but is now devoted to wounded veterans and charitable causes, met Markle on a blind date. The prince later said that’s when he realized he needed to up his game to win her heart. They grew closer while camping in Botswana, and now there is talk of starting a family.

But for some black women the engagement offered more than entertainment. It gave them a Cinderella story they could picture themselves in. Markle, who is divorced, is bi-racial and will be the first woman of color in modern history to join the British royal family.

“We all have this fantasy of being swept off our feet by the prince. It’s validation that, of course, we can be princesses,” Essence Magazine Editor-in-Chief Vanessa K. DeLuca said at the time.

Manny Macias came to America when he was just 3 months old. Three decades later, he became a citizen of the only place he’s called home.

The ceremonies can be huge moments for those involved. Many times they are family affairs, complete with proud smiles or tears of joy as the newest Americans realize dreams that were years in the making. Many dress in their best and pose for photos while clutching American flags. 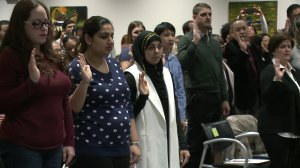 Macias, 31, said he’s now glad to be able to vote, have more stability and live without fear of being deported.

“It was important to me to get the documentation saying I was a citizen,” he said. “I did get a little emotional, because finally for me, the journey was done.”

The Senate cannot begin its trial until the article is formally sent over from the House, which voted 232-197 to impeach Trump on a charge of “incitement of insurrection” last week. The move came one week after the deadly riots at the U.S. Capitol on Jan. 6, and made Trump the first president in U.S. history to be impeached twice.

MOSCOW — The Kremlin has welcomed U.S. President Joe Biden’s proposal to extend the last remaining nuclear arms control treaty between the two countries, which is set to expire in less than two weeks.

Russian President Vladimir Putin’s spokesman, Dmitry Peskov, said Friday that Russia stands for extending the pact and is waiting to see the details of the U.S. proposal.

Beware COVID-19 scams: Here’s what to look for

Illinois girl, 3, fell from window at her home, died from cold, police say

Coronavirus guidelines now the rule at the White House

‘I thank God for her:’ South Memphis property manager gives back to tenants