RIVERSIDE, California — Neighbors who lived near Sherra Wright in Murrieta, California say the woman they saw in a wheelchair in court Monday is not the neighbor they know.

Instead they know her as the woman who walks up and down the street barefoot in a robe.

"She was that neighbor that woke everyone up in the morning walking down the street in her bathrobe screaming at people," one person said. 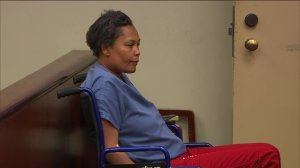 At least a half dozen neighbors said the same thing.

"Like everyone else has said, her walking around in her little white robe wailing her arms, talking on the cell phone."

Who she was on the phone with is a question this tight-knit community keeps asking, especially after hearing she was arrested Friday on the way home from her kids' basketball game.

She's charged with the murder of her ex-husband and hoop standout Lorenzen Wright. He was found shot to death in a swampy field off Hacks Cross and Winchester in Memphis seven years ago

Neighbors say Wright and several kids moved into the home six months ago.

Sherra and Lorenzen Wright had six children together. It's unclear who`s taking care of them now.

No one answered the door at Wright's home Monday. Neighbors said they haven't seen much activity here in a couple days.

He was a huge fan — but told us no one really knew their neighbor was once married to him.

Wright will be at the jail in Riverside until Wednesday when she faces a judge again to find out if and when she heads back to Memphis.

MEMPHIS, Tenn. — The Shelby County Health Department is taking a direct approach to target underserved communities in need of COVID-19 testing. Sunday, they hosted a mass testing event with hopes of reaching the Hispanic community.

MPD said around 7 p.m. they responded to a shooting in the 6500 block of Rocky Park Drive. When officers arrived, they found a man who sustained a gunshot wound and was pronounced dead.

MEMPHIS, Tenn. — A car struck a light pole and crashed into a tree on Mud Island late Sunday evening.

Witnesses told WREG-TV the driver of the car was driving erratically and speeding. Also, they said someone standing on the Greenbelt had to jump out of the way to avoid being hit. Emergency crews are on the scene working the accident.

Judge agrees to delay US government restrictions on WeChat

Man arrested after reportedly firing shots on I-240

Judge agrees to delay US government restrictions on WeChat