Skip to content
This is an archived article and the information in the article may be outdated. Please look at the time stamp on the story to see when it was last updated.
SHELBY COUNTY, Tenn. — Sexual assault, felony arrests, drugs, DUI  — more than 150 Shelby County Schools teachers have faced suspension, termination or resigned over the past three years, a WREG investigation into state records has revealed. What’s more, that number is about three times more than the comparable Metro Nashville school district over the same period. Bellevue Middle School parents received a voicemail in January: “Our boys basketball coach, who is a teacher at an elementary school, is accused of misconduct involving students,” it stated. Coach Mario Taylor was accused of tickling his players and trying to pull their pants down. The case remains under investigation. Three months later a Cummings Elementary School science teacher took the stand in court. Bragg Lampkin‘s students claimed he showed them porn and even got a 13-year-old male student to masturbate in front of him in his classroom. “I was trying to get down on their level, you know,” said Lampkin. Lampkin was sentenced to 30 days in jail for sexual exploitation of a minor and is now a registered sex offender. What’s even worse, we’ve uncovered more Shelby County teachers behaving badly, and their cases kept under wraps. Take Amber Henderson for an example. Deputies arrested her in January for allegedly driving drunk the wrong way on Highway 385 with her two kids in her car. SCS suspended her and the state is investigating. Then there’s Jameka Ward. She was at Oakhaven Middle when she played a part in a meth ring. She resigned before pleading guilty in February. Ondre Johnson is spending 10 years behind bars for attempted second-degree murder after pleading guilty last year. He was at Cordova Middle when he stabbed his fiance in Collierville multiple times. Parents asked us to look into these cases, so we pressed for answers. Every school district in Tennessee is required to let the state board of education know when a teacher is suspended, terminated or resigns in lieu of termination due to misconduct that would impact their license. The state then flags the teacher’s license and investigates to determine if the allegations are true and if a license needs to be revoked. WREG asked the state board how many times SCS reported a teacher over the past three school years. There were 155 reports in all. The accusations include inappropriate physical contact, sexual misconduct, felony arrests, police warrants, DUIs, harassment, and more. SCS says it has around 6,600 teachers in the district. So for comparison, we also asked the state board how many times Metro Nashville Public Schools reported a teacher, since it’s the most comparable in the state with around 5,200 teachers. Metro Nashville also reported unnerving allegations like rape and drugs, but not as many — MNPS reported 51 educators, just a third of what SCS reported. 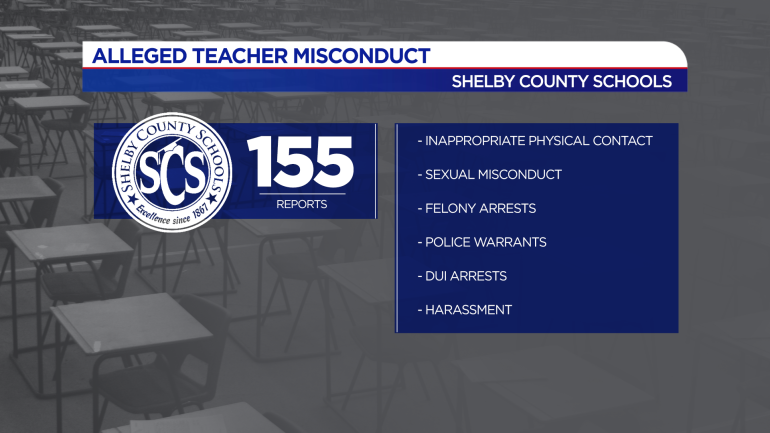 “Is knowing the numbers, is that just enough?” said Teresena Katron-Wright. She is with Memphis Lift, a group working to educate and empower parents about education. She hopes the district is taking a close look at the data. “I would like to see our children served a lot better,” she said. In 2017, the state board told WREG it revised the rules. Basically, it clarified what to report and when and gave “detailed definitions and examples.” In 2018, state legislators made those rules law. Officials with the state board told us, “staff has made an effort to raise awareness across the state regarding the rule changes” and “build relationships,” and their efforts have “led to a statewide increase in the number of licensure cases reported.” That’s the case for SCS. So far this year, it reported 143 educators to the state. In 2018, only 6. Same thing in 2017. We asked SCS multiple times about it, but never heard back. As of Thursday night, the only school board member weighing in is Kevin Woods. He stated in part, “While it may lead to an inflated number of reports, erring on the side of caution to better protect students should be applauded.” “It appears that any person, any child, any parent can say something. A teacher said this, did this and it’s reported to the state,” said Keith Williams with the Shelby County Education Association. Williams said he hopes teachers aren’t under attack. “I know we are the largest district, but it appears we are doing more than we need to do by the law,” said Williams. WREG also found out the state’s data may be off if a district doesn’t report an investigation. For example, Jasmine Edmond quit Raleigh Egypt High after the district started investigating claims last March that she had sex with a student. She was indicted in December but already landed another job at a charter schools, because SCS never reported her to the state until January when we asked questions. WREG asked SCS and Metro Nashville for a list of the teachers they suspended and fired, so we could cross reference the state’s list. Metro Nashville is still working on our request. SCS told us it would take six months to get the information. WREG is still going through the long list from the state and digging into every case to see if a teacher’s license was suspended, revoked or the accusation was unfounded. We’ve been asking Shelby County Schools for an interview since Monday. Thirty minutes before this newscast they sent us a statement saying there are “six” additional stipulations for reporting teacher misconduct, and the increase in reporting “is not a result” of employee misconduct but the district’s “due diligence” to follow the law.
35.129962-89.975127

With less than two weeks until Election Day, Obama delivered a sweeping condemnation of Trump while urging voters not to sit out the Nov. 3 election. He cast Trump as uninterested in leading America through the unprecedented challenges the country is facing.

At a Wednesday news briefing held with little advance notice, Director of National Intelligence John Ratcliffe said they are alerting the public that Iran and Russia took "specific actions" to manipulate public opinion regarding the election, particularly on the internet.

MEMPHIS, Tenn. — Memphis Police said they are looking for a 66-year-old woman who has been diagnosed with dementia.

Applications are down for Tennessee Promise scholarship opportunity

Mississippi officers get creative to free deer stuck in fence

Police focus on Lamar Avenue corridor as hotspot for crime