The plan calls for seven schools to eventually close and three new schools to be built.

Caldwell said the buildings are also old, forcing the district to continually shell out money.

"Rather than continuing to put money into building that are in need of repair, we're taking some offline and coming up with a new building," he explained.

One school set for demolition is Knight Road Elementary. Those students would go a few miles away to Goodlett.

While there's several slated buildings set to come down there's also plans for others to pop up. One example is at Goodlett where there's plans to have a new state of the art campus 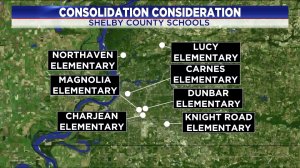 There's also plans to build a new campus at Alcy Elementary and rebuild the Woodstock facility reconfiguring it to K-12.

Another school set to eventually go is Dunbar Elementary in Orange Mound. It would be consolidated into Bethel Grove Elementary and Cherokee Elementary.

Wells has two children at the school. He understands the argument for the consolidation but likes things how they are now.

"I don't think it's gonna be good to spread them out like they always do because they'll have to make new friends you know? Start off with new teachers," he said.

"All these buildings are in close proximity so it's not like we're moving them to another part of the city," he explained.

With shrinking enrollment the district said consolidation is a solution to save money but there's still several steps in the process. Those include the school board signing off on the deal and asking county commission for the millions to make the projects possible.

The School Board could decide in December whether or not to move forward with the plans and they won't all happen at once.

One in three young adults is at risk of severe Covid-19, and smoking plays a big part in that risk, according to new research published Monday in the Journal of Adolescent Health.

Researchers at the University of California, San Francisco, looked at more than 8,000 participants ages 18 to 25 who had participated in the National Health Interview Survey to see what their medical vulnerability to severe Covid-19 was in relation to risk indicators that had been set out by the US Centers for Disease Control and Prevention, including health conditions and smoking habits.

It's been 25 years since the last Ford Bronco was made. Ford is bringing the brand back, with the unveiling of three new off-road-oriented SUVs under the Bronco name. At an online event Monday night, Ford introduced the 2021 Bronco, which will come in a two- and a four-door version, and the smaller Bronco Sport. The new Broncos are engineered for hard off-road driving and include features designed to make it easier to get far from civilization and even stay there for a while.

The Bronco, which will come in a two- and a four-door version, and the smaller Bronco Sport will compete directly with Fiat Chrysler's Jeep line of off-road vehicles. The market for rugged SUVs, which Jeep currently dominates, is growing twice as fast as SUVs overall, Ford executives have said.

MANSFIELD, Ohio (AP) — Three Ohio sisters have defied odds by giving birth on the same day in the same hospital with the same obstetrician overseeing their deliveries.

Here’s how to file for a tax extension

Tom Bergeron not returning as host of ‘Dancing with the Stars’

Here’s how to file for a tax extension