MEMPHIS, Tenn. — There have been seven shootings across the city of Memphis since Thursday, and more than one person was shot in some of those incidents. Three people died in the seven shootings, and public health officials say this is now a crisis.

The violence stretched from Raleigh to Orange Mound to the Medical District, but there could have been more, as these are just the shootings police have told us about. 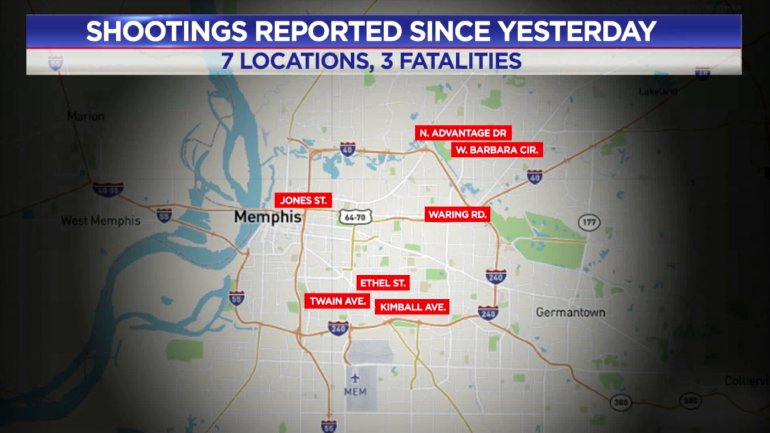 Barry Jones knows four people injured in the 24-hour span. Three of his friends are recovering after they were shot in off Ethel in Orange Mound, and he said his cousin was killed on Kimball earlier in the day.

Jones said he does whatever he can to deter violence in the Orange Mound neighborhood.

Experts said that constant sense of loss has long term consequences on communities.

“If we look at individuals, those who witness violence or are victims of violence are more likely to have poor health, the more likely to encounter behavioral health or mental health issues, and for young people it impacts their ability to be educated,” said Alisa Haushalter, director of the Shelby County Health Department.

Haushalter said violence needs to be addressed from a public health perspective, like how Shelby County has tackled the opioid epidemic.

“Violence is a health crisis, yes,” she said. “It is across the United States, but we know in Memphis, particularly in Shelby County-wide, it’s been a historically health crisis here.”

As crime seems to increase in the summer, the City of Memphis has created the Play Your Parks program, a safe place for kids to go in their neighborhood to have free, supervised fun.

But even with the help, Jones knows things must change.

Arrests have been made in several of the shootings.

Anyone with more information can call Crime Stoppers 901-528-CASH.

FOXBORO, Mass. (WPRI) — After losing to the Seahawks, the Patriots will look to bounce back on Sunday as the Raiders come to Foxboro for the first time since 2014.

For the second straight week, quarterback Cam Newton recorded two rushing touchdowns. He racked up 47 yards on 11 carries, and through the air, he had 397 passing yards and a passing touchdown to fullback Jakob Johnson, who registered his first NFL score.

LOUISVILLE, Ky. (AP) — A diverse crowd of hundreds marched in Louisville's streets chanting “Black Lives Matter" on Saturday night, the fourth night of protests after a grand jury declined to charge officers in the fatal shooting of Breonna Taylor.

People in the crowd also chanted “No Justice, No peace” as cars honked along a busy downtown artery in this Kentucky city that has seen more than 120 days of demonstrations over the death of the 26-year-old Black woman in a police raid gone wrong.