MEMPHIS, Tenn. — An Oakhaven Elementary teacher is now out on bond after being accused of aggravated statutory rape, as SCS personnel disciplinary files reveal new details in his case.

Marvin Straughter was in court this week, accused of raping a 14-year-old boy more than once between July 2018 and August 2019.

Records state that on Dec. 2, a teacher at another school confiscated a student’s phone. Days later, the student’s great-grandfather showed up at the school and claimed he found out that Straughter had given the phone to his 14-year-old great-grandson, so they could communicate.

He also told the principal he had a tablet with inappropriate messages and pictures, and that his grandson sneaked out in the middle of the night to meet Straughter. Police were immediately called.

Also in the file, WREG found emails Straughter allegedly sent to the boy’s teacher. He called himself a “mentor” and even tried to get his phone back before police seized it.

Personnel records contained other complaints teachers and students made against Straughter over the past few years. They allege he “yelled at” and “belittled his students” and tried borrowing money from staff and students on multiple occasions.

One letter, apparently from a student, states that Straughter borrowed money from him or her. He mentioned going out to eat outside of school, and the student suggested that Straughter and another teacher could go to the student’s parents so it wouldn’t be a “questionable situation.”

Other documents show Straughter apparently struggling to post grades and follow school policies. In one letter, a principal states Straughter lied in his interview about being married.

One letter from Whitehaven Elementary STEM School dated February 2019 stated Straughter had pushed a child. The incident was reported to DCS. 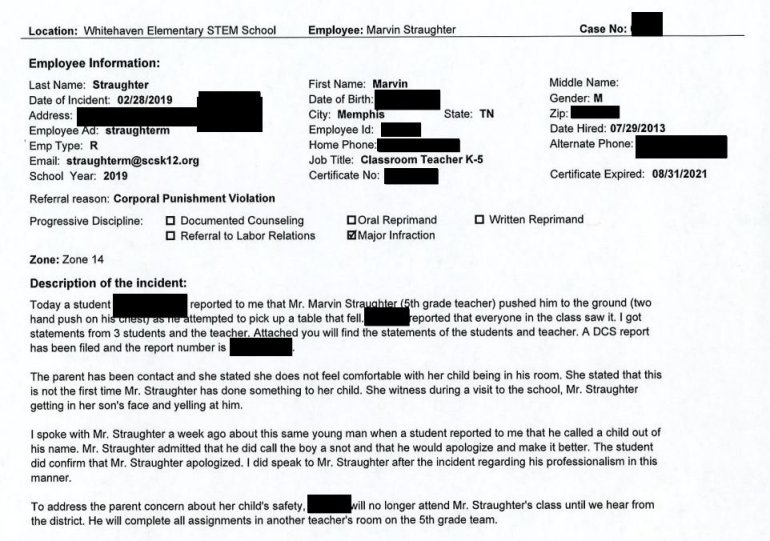 The district placed Straughter on paid leave Dec. 10, and under Tennessee law was supposed to notify the state about his suspension within 30 calendar days.

But another document showed the district waited until after WREG started asking questions. It finally let the state know what happened on Jan. 14.

Straughter started at SCS in 2013, but before then worked in Ohio and Georgia.

His case is set to go before a grand jury.

The state’s report on Straughter is  here.

GENEVA (AP) — Just about everybody, especially the organizers in Japan and Switzerland, want the Tokyo Olympics to open on July 23 — as scheduled.

And yet, 2021 is starting on a similar path that led to the decision last March to postpone the games for a year because of the coronavirus pandemic.

WASHINGTON (NEXSTAR) -- Democratic lawmakers are currently working on a plan that could expand the child tax credit to send recurring monthly payments to adults with children, according to The Washington Post.

The payments would be included in President Biden's $1.9 trillion relief package.

Detectives began the investigation on January 10. So far, four people have been arrested on rape, kidnapping and trafficking charges.