WASHINGTON (AP) — At some of the nation’s largest universities, the vast majority of sexual assaults take place not in dorm rooms or anywhere else on school property but in the neighborhoods beyond campus boundaries, according to data obtained by The Associated Press.

But the schools’ obligation to investigate and respond to those off-campus attacks could be dramatically reduced by the Education Department’s proposed overhaul of campus sexual assault rules. That’s alarmed advocacy groups and school officials who say it would strip students of important protections in the areas where most of them live.

At the University of Texas in Austin, officials have received 58 reports of sexual assaults on campus grounds since the fall of 2014 while fielding 237 involving private apartments, houses and other areas outside campus, according to the data obtained through public records requests. Another 160 reports didn’t include locations.

“The majority of our students are just not in proximity to campus, and a lot of things happen when they’re not on campus,” said Krista Anderson, the university’s Title IX coordinator. Of the school’s 51,000 students, she said, only about 18 percent live in campus housing.

For now, federal guidelines urge colleges to take action against any sexual misconduct that disrupts a student’s education, regardless of where it took place.

But in its proposed rule, the department says schools should be required to address sexual misconduct only if it occurs within their “programs or activities,” a designation that would exclude many cases off campus.

The proposal is included in Education Secretary Betsy DeVos’ revision of Obama-era guidance on campus sexual assault, which officials say is unfairly skewed against those accused of assault and goes beyond the intended scope of Title IX, the federal law barring sex discrimination in education. Some colleges had complained that the Obama rules were too complex and could be overly burdensome.

The AP asked the nation’s 10 largest public universities for several years of data on the topic. Out of eight that provided data, five had more reports from off campus than on school property: The University of Texas, Texas A&M, Arizona State, Michigan State and the University of Central Florida.

At Texas A&M, for example, the number of sexual assaults reported from beyond campus since 2014 is twice the number on school property.

Leaders of some schools say the proposal appears to let them decide whether to handle cases beyond their borders, but conflicting language has led some to believe they would actually be barred from it. 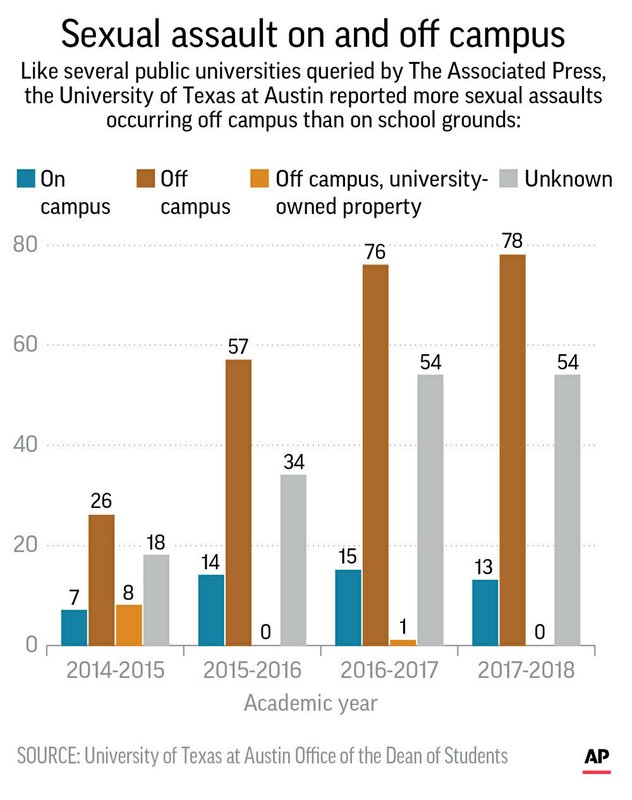 “There is a concern that these regulations might strictly limit the jurisdiction of the university to conduct which occurs on campus,” said David Bunis, general counsel for Worcester Polytechnic Institute, a private school in Massachusetts.

Department spokeswoman Liz Hill said schools would be able to investigate cases outside their programs “at their discretion” but did not clarify the discrepancy. Unless the conflicting language is changed, legal experts say, it could give accused students legal grounds to get their cases dismissed.

Since the proposal was issued in November, it has generated a flood of feedback from students, parents, schools, politicians and activists on both sides.

A recent public comment period drew more than 104,000 responses, already the most in department history, and federal officials announced Tuesday that they would re-open the comment period for one day, on Feb. 15, because technical errors may have blocked some users from submitting feedback.

Tens of thousands of comments have been credited to campaigns meant to inundate the agency with criticism. In western Pennsylvania, for example, a local chapter of the National Organization for Women recently hosted an event on how to submit comments, one of many similar gatherings across the country.

Opponents are fighting against several of the plan’s key provisions, including changes that would narrow the definition of sexual harassment and allow students accused of sexual misconduct to question their accusers through a representative.

Few points, however, have drawn as much anger as the move to reduce schools’ obligations off campus. In public comments, students said it would leave little recourse for those assaulted at parties, bars or other sites. Advocacy groups worry that fewer victims would report assaults, and that more would drop out of school.

“We think it’s very dangerous,” said Terri Poore, policy director at the National Alliance to End Sexual Violence, an advocacy group in Washington, D.C. “There are several other very, very, disturbing issues, but this is absolutely among the worst aspects of the proposed rule.”

Many colleges have raised their own concerns, especially institutions that fear the rule would cut off their authority at campus boundaries.

Laurie Nichols, president of the University of Wyoming, told the Education Department that curbing schools’ powers would simply push sexual violence to areas where offenders know they’re beyond the school’s reach.

In her comment, Nichols added that refusing to take action off campus “communicates indifference on the part of the institution and ignores the impact of these experiences on a student’s ability to succeed in the classroom.”

Still, few colleges are asking the department to keep things just as they are. Instead, many want the flexibility to decide which cases to handle, even though they say they have no plans to scale back investigations.

Loyola University in Chicago is among those asking for the discretion to choose. Officials wrote that, regardless of where sexual misconduct takes place, “the lasting impact of such misconduct is likely to affect our students’ education and sense of safety.”

Further questions have emerged about the handling of online sexual harassment, which isn’t explicitly addressed in the proposal. It’s a major concern for many schools below the college level, which are bound by the same federal rules and have faced growing problems with cyberbullying.

The School Superintendents Association, which represents more than 13,000 education leaders, told the department it was “shocked” that the proposal seems to prevent schools from responding to online sexual misconduct.

“While monitoring and taking steps to address these activities can be burdensome, district policies have been built around doing so,” the group wrote. “This would unduly tie the hands of school leaders who believe every child deserves a safe and healthy learning environment.”

Even supporters of the rule say it needs clarification, but they contend it’s a step in the right direction. Some argue that police are better equipped than schools to handle cases away from campus property, although advocates who work with victims counter that only a fraction of assaults are ever reported to police.

Cynthia Garrett, leader of Families Advocating for Campus Equality, a group that represents students accused of sexual misconduct, said existing rules have led some colleges to investigate sexual misconduct hundreds of miles away. She added that schools should handle some off campus cases, but only within reason.

“I just think it has to be a practical consideration. Is this something where the school has any power over the property? Can they go there? Can they look at the evidence?” she said. “It’s very difficult to set a bright-line rule, which is unfortunate because it would certainly help matters.”

The Education Department is now reviewing the public comments before it issues a final rule, a process expected to take several months.

Federal officials estimate that, if the rule is finalized, the number of off-campus cases schools investigate would fall by somewhere between 11 percent and 30 percent. As a result, the agency predicts, schools would collectively save up to $456 million over a decade.

Officials based their analysis on the assumption that about 40 percent of sexual assaults involving students take place off-campus, a statistic that comes from an insurance company’s study of 305 sexual assault claims filed between 2011 and 2013. Some other surveys have put the figure above 60 percent.

Colleges say it’s difficult to track exactly how many offenses take place off-campus. Many assaults are never reported. Sometimes the information is channeled through friends or professors who don’t know where it happened.

At the University of Florida it was roughly an even split between off-campus and on-campus sexual assault complaints, according to the data obtained by the AP. Ohio State University had more cases on campus. The University of Maryland University College, which does not have residence halls and offers the majority of its classes online, says no sexual assaults have been reported in the past five years.

“It is the university’s mission to provide a safe environment for all students and employees. Accordingly, we have no plans to change this practice, but we’ll reassess if mandated to do so when the new regulations are issued by the federal government,” Nancy Myers, director of the school’s Office of Institutional Equity, said in a statement.

Anderson, the University of Texas official, said the school has no plans to narrow the scope of its work even if the final rule allows it. Although cases that arise off campus can be complicated, she said, the university will continue to investigate them unless it’s explicitly forbidden.

“The complex cases are the ones that need our attention,” Anderson said. “We have a duty to address those and respond to it appropriately.”

Man, child injured when car comes under gunfire on Highway 385