HELENA-WEST HELENA, Ark. — Police in Helena-West Helena said a masked man struck again and robbed the same bank that was victim to a robbery last week. 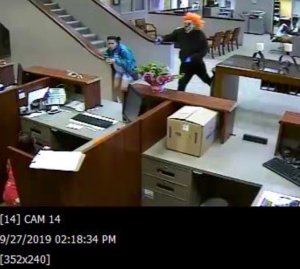 A robber wearing an orange and white clown mask entered the Southern Bancorp in West Helena at 425 Plaza Street on Friday armed with a black semi-automatic handgun. He demanded money from the tellers, but it’s currently unclear if he got away with anything from the bank.

The prior Saturday, a man robbed a nearby Tobacco Superstore while wearing a gorilla mask.

Police said they think the same man is responsible for all the robberies, and he was using the same gun.

He was seen Friday leaving in a white four-door Ford Taurus, and police said they think the car has Tennessee tags. He was last seen driving south on 4th Street, police said.

During last week’s robbery at the post office, a customer in the store at the time accused the employees of abandoning him in the lobby with the robber. A $50,000 reward was being offered last week for information in the post office robbery.

Anyone with information is asked to call the Helena-West Helena Police Department at (870) 572-3441.

Full list: All the pardons and commutations issued by President Trump in 2021

WASHINGTON (NewsNation Now) — President Donald Trump issued 73 pardons and 70 commutations, announcing early Wednesday a list of those granted clemency with less than 12 hours left in his four year term as President-elect Joe Biden is set to be sworn in at noon.

Full list: All the pardons and commutations issued by President Trump in 2021