MEMPHIS, Tenn. — A busy toddler has become the punch line of jokes making their rounds on the Internet.

“It’s not about this baby or her naked bottom. It was about haters,” explained Imagine Vegan Cafe’s owner Kristie Jeffrey. “And those with a negative outlook on veganism to have an avenue to backlash.”

A customer at Imagine Vegan Cafe shared her experience at the Cooper-Young restaurant pointing out a baby showing off her backside while she tried to dine and another child singing during her meal.

Kristie and her husband Adam Jeffrey admit there was an incident but say the review didn’t tell the whole truth.

“She’s just discovered there is Velcro on her diaper,” Kristie Jeffrey said.

“She ran straight out to the restaurant did a loop around. My husband was right behind her and quickly scooped her up.”

Just as quickly as that Velcro snapped into place, the madness started.

This mother says she did something she normally wouldn’t do and called out the customer by name.

We asked her if she regretted her response.

“I don’t because I’ve had to keep my mouth shut and I am not scared anymore,” shares Jeffrey.

A move that ignited a social media craze, the couple says they’ve gotten hundreds of prank calls and so many hurtful comments on unrelated posts that they’ve pulled down their Facebook account

“It’s not normal for her to be in the restaurant with no clothes on,” said Adam Jeffrey. “That is a rare one-time incident it’s been turned into something way more than it was.”

WREG reached out to the woman who posted the review, she didn’t want to go on camera but told us her review was honest and said she is shocked by the harassment that followed. 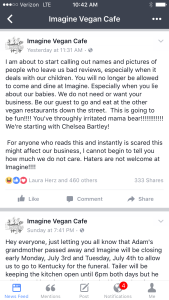 It’s the quick toddler streak that has even launched a fake restaurant page filled with parodies and hashtags about the customer’s experience.

While it’s quickly gaining a following these parents don’t find it funny.

“This one particularly struck a chord because I don’t like people spreading lies about my children,” shared Jeffrey.

For the couple, it can’t be more clear than it’s written on the menu.

It’s a child-friendly environment. If you don’t like singing during dinner you may want to take your business elsewhere.

LOS ANGELES (NewsNation Now) — There aren’t as many bargains in the used-car market these days. It’s partly due to a chip shortage that’s been cutting into the inventory of new cars, and pushing people into the pre-owned market.

The offerings are usually packed into the Venice Cash for Cars lot in Los Angeles. But these days, there’s only about a dozen.

MEMPHIS, Tenn. — Shelby County deputies recovered dozens of vehicle and other stolen property while executing a search warrant at a chop shop on North Highland Street.

According to the Shelby County Sheriff's Office, authorities searched 1615 and 1625 North Highland St. on May 5 and located 22 cars, a roll-back wrecker, three trailers, a four wheeler and a forklift.

The Springdale, Arkansas-based company said Monday that absentee rates are around 50% higher than they were before the pandemic. The company says government stimulus payments, health care concerns and child care issues are making it harder to keep workers.

Foxes appear at Dixon Gallery and Gardens in East Memphis

See how much states, counties will get from $350B COVID relief program

Why the Colonial Pipeline hack matters to you