LUXORA, Ark. — An Arkansas State Police dog and the suspect he was chasing were both killed in a shootout with authorities in Mississippi County, Arkansas.

According to the ASP, the trooper was patrolling I-55 near the 56 mile marker Monday when he spotted a vehicle that had reportedly been involved in a chase with law enforcement officers in Missouri. 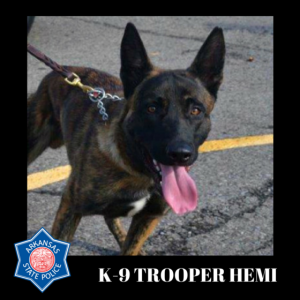 The unidentified driver was pulled over, but ran from the scene. Two state troopers and a Mississippi County Sheriff’s Deputy pursued the suspect and eventually deployed a K-9 Trooper named Hemi.

Hemi reportedly caught up with the suspect and made contact. The suspect shot the dog, then turned on officers and began firing, the ASP said.

Crittenden County Lieutenant Darrell Prewitt and his K-9 Argos have been partners for years, and he even has a retired K-9 at home.

That’s why he says it’s hard for him to even think about losing him in the line of duty.

“I couldn’t imagine coming to work and not having him with me. It’s just that type of bond.”

The suspect was shot during the encounter and later died from his injuries. One state trooper was also injured during the chase but is expected to be okay.

The two state troopers involved in the incident have been placed on paid administrative leave pending the outcome of the investigation.

MEMPHIS, Tenn. – A man is behind bars after police say he carjacked a man at gunpoint in his own driveway.

The victim had just gotten off work and was pulling into his driveway on Delta Road in southwest Memphis around 8 p.m. Sunday.

WREG-TV ordinarily do not identify victims of domestic violence, but she chose to come forward and share her story.

HORN LAKE, Miss. - From her hospital bed, a Horn Lake woman is confronting the boyfriend she says stabbed her multiple times in her stomach, while she was holding their six-month-old daughter.

NASHVILLE, Tenn. (WKRN) — If you are one of the millions of Americans who struggle with allergies, you may find your symptoms lasting longer and worsening. The culprit? Warmer temperatures, which are leading to a lengthened allergy season and more pollen in the air.

Researchers have discovered that allergy season is lasting longer, and pollen levels are rising throughout North America, with some of the biggest changes happening in the Southeast and the Midwest.

Why some people should return their stimulus checks

Where are masks required? Interactive map helps you find out

In-person learning ‘only way’ to get students back on track, Gov. Lee says

Suspects plead not guilty in killing of Helena-West Helena officer

Why some people should return their stimulus checks