WASHINGTON — An airstrike against Syria killed at least 7 people Thursday night according to CBS News.

CBS News is reporting the United States has fired missiles against the Assad regime following a deadly attack on civilians this past week. The attack left more than 80 people dead.

The strikes are the first direct military action the US has taken against the leadership of Syrian President Bashar al-Assad in the country’s six-year civil war and represent a substantial escalation of the US’ military campaign in the region.

The US began launching airstrikes in Syria in September 2014 under President Barack Obama as part of its coalition campaign against ISIS, but has only targeted the terrorist group and not Syrian government forces. 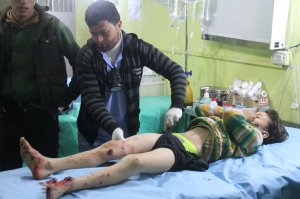 Trump’s order to strike the Syrian government targets came a day after he said the chemical attacks — whose grisly effects were broadcast worldwide thanks to videos captured in the immediate aftermath — “crossed a lot of lines for me” and said he felt a “responsibility” to respond.

“I will tell you it’s already happened that my attitude toward Syria and Assad has changed very much,” Trump said.

“When you kill innocent children — innocent babies — babies — little babies with a chemical gas that is so lethal, people were shocked to hear what gas it was, that crosses many, many lines. Beyond a red line, many, many lines,” Trump said.

Syria’s six-year civil war has claimed the lives of at least 400,000, according to a United Nations estimate released a year ago. More than 5 million Syrians have fled the country and more than 6 million more have been displaced internally, according to UN agencies.

So far this year, there have been 220 murders in Memphis. The city's 247 homicides, a slightly different statistic than murder, is a record.

MEMPHIS, Tenn. — School bells are expected to ring again at Shelby County Schools come early January, as the system begins to return students to class in phases. Parents have until the end of this month to choose in-person or virtual, but some have already decided.

If all goes according to plan, SCS student will return to the classroom at the start of the new year. Some people have already made the decision as to whether or not their students will go back to class or not.

MEMPHIS, Tenn. -- Virtual learning is the new norm for thousands of students in the Memphis area. WREG's April Thompson spent the day with families and teachers as they maneuver the successes and challenges of this unprecedented way of educating children.

The day starts early for 10-year-old Dey-Lan as the fifth grader gets ready for school.

‘I was so scared’: Pumpkin thrown off overpass smashes through student’s windshield

Mid-South man indicted on murder charge after teen gunned down