MEMPHIS, Tenn. — Water poured in and flooded the lower level of Bardog Tavern on Thursday morning after an MLGW water main broke.

The flooding forced the iconic downtown Memphis bar to close for repairs, again.

He said he missed out on thousands of dollars in business Thursday. 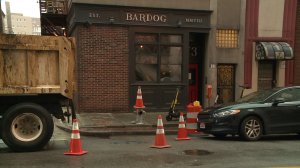 This is the fifth time Bardog had to shutdown for plumbing-related issues since late September when a city sewer line broke. Dean said the cleanup and repairs were costly and forced the bar to close for six and a half days.

“I have 37-38 employees who were out of work for six and a half days,” Dean said. “Until I find a way to get that money back in the bank account, that’s money unpaid to those workers.”

Dean hopes to recoup the revenue lost and money spent on repairs by filing claims with the city and MLGW.

“There’s an obvious onus on the city and the utility companies to say, ‘Hey, we were wrong. We messed up. Our systems failed. How much did it cost you? Here’s a check,'” Dean said.

“I like to think this too shall pass, so hopefully, we have a good, long future ahead of us for Bardog,” Dean said.

He said he’s had other problems with the city’s sewer line is years past. In fact, he said he might look for another location if problems continue to pop up.

CHICAGO - The Chicago Department of Public Health has issued an Emergency Travel Order that directs travelers returning to Chicago from states experiencing COVID-19 hot spots to quarantine for 14 days.

The order will go into effect at O'Hare and Midway on Monday at 12:01 a.m. It applies to states that have a case rate greater than 15 new COVID-19 cases per 100,000 resident population, per day, over a 7-day rolling average.

Rite of Passage on Wednesday assumed control of day-to-day operations of facilities in Dermott, Harrisburg and Mansfield after legislators approved a $70 million contract last year that ends in 2023, the Arkansas Democrat-Gazette reported. Rite of Passage had already been managing the Arkansas Juvenile Assessment and Treatment Center in Alexander since 2016.

SOUTHAVEN, Miss. — Marilyn Burns can't walk outside her Southaven home without getting hit in the face with a reminder of what she and her husband have faced since 2001 in their Highland subdivision.

A constant stream of water flows along their driveway and curb, even on bone-dry days. Every year it keeps getting worse, she said.

Hundreds flock to Millington for Shelby County’s only fireworks show

Nashville scaled back a reopening plan. Could Memphis follow?

Hundreds flock to Millington for Shelby County’s only fireworks show