MEMPHIS, Tenn. — Police are investigating a homicide after a man shot early Tuesday morning died from his injuries.

The shooting happened at the America’s Best Value Inn in the 1300 block of Springbrook.

Family members identified the victim as 41-year-old Luther Street. His mother, Earline Street, says she begged him to stop staying at this hotel, but he wouldn’t listen.

“I knocked, and I knocked. He would not come out of there,” she said.

She told WREG she believes a woman he was dating had something to do with the shooting, but she didn’t know the suspects or why they shot him.

“It hurts so bad,” the victim’s mother said.

People who live and work around the motel say it can be a dangerous place with fights happening all the time.

Family members say Street and his girlfriend had been renting a room for several weeks.

The victim’s mother says she doesn’t know why anyone would shoot her son, but suspects his girlfriend played a part.

“The woman he was with, I believe she had something to do with it,” Street said.

Housekeeper Ciara Jones says she saw the victim every day.

“Luther was a cool person. He didn’t bother anybody, you know. He made sure everything was alright,” Jones said.

She says the people causing problems in the area need to stop.

The heartbroken mother wants violence to stop too, even though it’s tool late for her child.

“If he would have stayed where he was I don’t think all of this would have happened,” Street said.

Authorities have also not released any suspect information other than to say they reportedly fled in a black car. 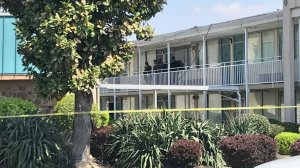 MEMPHIS, Tenn. — All lanes on the Hernando Desoto Bridge were closed Tuesday until further notice after an inspection found a crack that requires investigation, Arkansas officials said.

Memphis Police said the bridge is being inspected, and it is unknown when the bridge will reopen.

Dogecoin ‘to the moon,’ will fund SpaceX project, Musk says

(KTVX) - Dogecoin to the literal moon?

The cryptocurrency, a non-tangible monetary asset based on an early 2010s meme featuring a Shibu Inu dog, has developed its own online community. That community, which includes billionaire and crypto enthusiast, Elon Musk, even has its own tagline, "doge to the moon."

“We will no longer participate in federal pandemic unemployment programs because Tennesseans have access to more than 250,000 jobs in our state,” Lee said in a statement. “Families, businesses and our economy thrive when we focus on meaningful employment and move on from short-term, federal fixes.”

Package with $495,000 worth of fake championship rings intercepted in Indianapolis

Good Morning America to broadcast live from Dollywood on Wednesday

Stocks pull back on Wall Street as inflation concerns grow

Dogecoin ‘to the moon,’ will fund SpaceX project, Musk says

Package with $495,000 worth of fake championship rings intercepted in Indianapolis