The incident happened at the Hilton Garden Inn in the 100 block of Union Avenue around 3 a.m. Friday.

According to police, 26-year-old Alexander Kahmann of Chicago entered the hotel, pulled out a gun and fired shots at the security guard. He then ran out of the hotel. Police later found a camouflage backpack the man was carrying.

Just before 9 a.m., officers announced they had captured Kahmann near Lamar Avenue and Bellevue. He was taken to the hospital to receive treatment for an injury he got when he reportedly punched a glass door at the hotel.

Investigators say Kahmann was traveling with a family member from Chicago to California.

He is charged with attempted first-degree murder, aggravated assault, reckless endangerment and a weapons charge, according to Shelby County jail records. 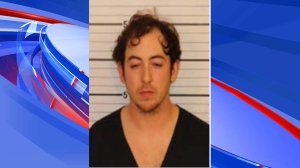 “It seems in this day and age it doesn’t take much to upset people to do really drastic things,” hotel guest Jim Wynne said.

Wynne said the situation is startling, being at a hotel with guests from all over the world.

The hotel has only been open for about three months.

Authorities told WREG no one else was hurt in the shooting.

FLORENCE, Ala. (WHNT) – Alabama police are investigating the homicide of a child they say was made to look like a hot car death.

On August 12, Florence Police officers responded to the North Alabama Medical Center about the death of 3-year-old Kaiden Garner.

GATLINBURG, Tenn. (WATE) -- Millions of dollars of backlogged maintenance in the Great Smoky Mountains National Park could soon be taken care of thanks to the Great American Outdoors Act.

Tennessee Senator Lamar Alexander helped to get the act passed and onto President Trump's desk to sign earlier this month.

MEMPHIS, Tenn. -- Memphis Police say one man was injured Saturday in a shooting in Cordova.

Officers responded to a shooting call at a home on Beaver Trail near Shallow Glen Trail.

One dead in South Memphis shooting

Shooting injures one in downtown Memphis

If you haven’t received your $500-per-child stimulus check, the IRS has good news

American shopping is back to pre-pandemic levels. That’s a big deal

One dead in South Memphis shooting