MEMPHIS, Tenn. — Memphis Police say a 4 year old boy was grazed by a bullet after playing with a gun.

Officers responded to the scene in the 3400 block of Sophia sometime after noon on Sunday. They say the child found a gun under a bed in the home, began playing with it and injured himself.

The victim and his family then left the home on Sophia and arrived at a McDonald’s in 3300 block of Winchester. Officers also responded to that location.

The boy was taken to the hospital in non-critical condition. 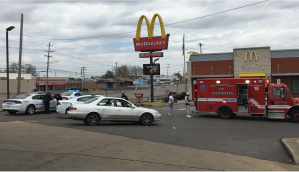 Man accused of hitting officer was wanted in shooting

Man killed in shooting near airport

5 things Republicans would do in a House majority