MEMPHIS, Tenn. — A man was caught on camera taking off in a woman’s SUV after carjacking her at an East Memphis gas station.

Police say they still haven’t found the suspect or the SUV.

Surveillance video WREG got ahold of Saturday shows the moments leading up to and after the bold carjacking in one of the city’s safest neighborhoods Friday morning.

“Unfortunately, crime has no time. So, it could be any time, but that is very worrying,” delivery driver Jerald Harris said. 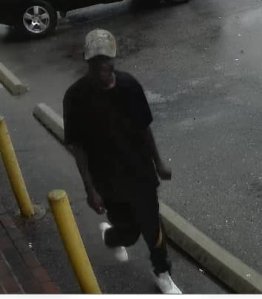 Cameras outside a liquor store next to the BP on Poplar Avenue near Colonial Road caught images of the suspect that may be enough for someone to identify him.

The video shows the man run across Poplar to a shopping center next to The Spirits Shoppe around 11 a.m. Friday. He looks around, seemingly searching for someone to target, then walks up to one driver who appears to ignore him and pulls off.

But the thief doesn’t give up. The cameras captured a grainy, but up-close shot of his face as he walked across the liquor store parking lot.

Another angle shows the suspect from behind, limping as he makes his way to the gas station next door. That’s where police say he walked up to a woman and threatened to shoot her if she didn’t give up her SUV.

Police say the two got into a physical scuffle as she tried to fight him off.

“I think you should just give it up ’cause your life can’t be replaced, but everything else you have, it can be replaced,” BP customer Rachel Smith said.

Seconds later, another camera captured the man speeding off in that woman’s SUV.

“That’s horrible,” Smith said. “It should be better than that. People shouldn’t take people’s cars – stuff they work hard for. Like, that’s not right.”

“People just need to be a little more careful, a little more aware,” Harris said. “Definitely watch your surroundings… Watch your belongings, don’t leave your car running. I know a lot of people do that when they go to the gas station.”

Police haven’t said if the woman left her car running or what she was doing when she was carjacked.

Investigators say the suspect is 35 to 45 years old and was wearing a multi-colored baseball cap, black t-shirt, dark pants and white sneakers. The stolen SUV is a 2017 silver Nissan Pathfinder.

If you think you might know who the suspect is, call CrimeStoppers at 528-CASH.