MEMPHIS, Tenn. — A group of young men are in jail, accused in a string of violent carjackings, robberies and an attempted murder.

One of their alleged victims, who shared her story only with News Channel 3, explained how she used an app on her cell phone to help police track the suspects down.

The woman didn’t want to be identified, but told WREG she’s grateful to be alive to see another day.

“Looking down the barrel of that gun and him having that gun pointed at me, I honestly told God if I did any type of sin, please forgive me at that point ‘cause I thought my life was fixin’ to get taken,” she said.

She was the first of three people police say Angelo Smith, 20, Terrance Moore and Justin Huddleston, both 18, targeted in a crime spree Friday morning. 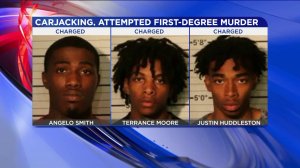 “I have kids, I have grandkids – and it really scared me,” she said.

She told WREG she was in her car outside the InTown Suites on Ridgeway Road around 2 a.m. when she says Moore knocked on her window with his gun pointed at her head.

“He told me if I didn’t get out of my car, he was gonna blow my brains out,” she said. “He just kept on saying, ‘Stop looking at me.’ I couldn’t stop looking at him for some reason.”

Court records show Moore snatched her cell phone and keys, then picked up Huddleston and Smith, who were waiting in the parking lot.

“I just stood there looking at him,” she said. “And he drove off in my car, and I watched my car drive up Ridgeway.”

Investigators say two hours later, the suspects followed another woman from a Valero gas station on South Perkins – in the first victim’s stolen car – then tried to carjack her, too.

The second woman sped off, and police say Smith shot at her, hitting her car twice.

Twenty minutes later, investigators said the trio went back to the same Valero, stealing a man’s truck, which was filled with lawn equipment, as he pumped gas.

Later that afternoon, the first victim who spoke with WREG got a new cell phone and used an app connected to a tracking device in her car to help police find the suspects.

Officers found the three trying to pawn that stolen lawn equipment and arrested them.

The first victim said she hopes the suspects turn their lives around.

“Do something with your life. Stop doing that,” she said. “And I’m not gonna say I hate you, but I love you with the love of the Lord, and I pray that you get your life on track.”

They will be in court Monday.