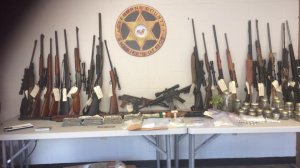 CLEBURNE COUNTY, Ark. — Drug and gun related charges have been filed after authorities raided a home reportedly dubbed the “one stop shop” for those looking for illegal items in Cleburne County, Arkansas.

On Monday, Cleburne County detectives finally executed a search warrant on the Floral Road  home after a year long investigation into 59-year-old Carl Watts. Watts had reportedly been suspected of participating in illegal activities,but what he was involved in was just recently brought to light for the public.

During the raid, detectives seized 27 guns, $66,000 in cash and several different illegal drugs, including cocaine, LSD, opioids, crystal meth and marijuana. They also found chemicals inside the home consistent with a meth lab.

Watts was also reportedly running a moonshine operation with a still and finished booze ready for sale. 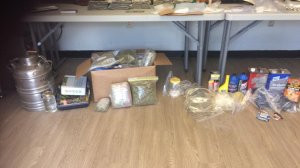 MEMPHIS, Tenn. — Police say a Memphis man was caught on camera stealing thousands of dollars worth of jewelry from a warehouse in Southeast Memphis over a two-month period.

Investigators said Anthony Shearer, 28, somehow got into the TJX Fulfillment Center on East Holmes Rd. on April 9, 10, 11, and multiple times in March and took jewelry valued at $22,466.

AUBURN, Ala. (WRBL) - An east Alabama man and employee of the Auburn City School System is facing five counts of Production of Pornography with Minors after being arrested by the Auburn Police Department.

David Johnson was arrested Tuesday, April 13, 2021, by Auburn Police. Johnson was booked into the Lee County Detention Facility and was released the same day after making a $125,000 bond.

Big business has ratcheted up its objections to proposals that would make it harder to vote, with several hundred companies and executives signing a new statement opposing “any discriminatory legislation."

The letter, published Wednesday in The New York Times and The Washington Post, was signed by companies including Amazon, Google, Starbucks and Bank of America, and individuals such as Warren Buffett and Michael Bloomberg, plus law firms and nonprofit groups.

To retain workers, Walmart moves more of them full time

Buffets allowed to re-open in Shelby County, with new guidelines

Planning to travel this summer? You’re not alone

‘The law needs to change.’ Woman says her property no longer belongs to her after someone filed fraudulent deed

To retain workers, Walmart moves more of them full time