MEMPHIS, Tenn. — One person was dead and at least two others taken to the hospital after an accident Thursday morning in the Hollywood area.

The accident happened near Chelsea and Fairfax just before 9 a.m. and at least two vehicles were involved. Police said it was a head-on collision, leaving one vehicle overturned. One of the vehicles was a taxi.

One person was dead on the scene. Police have not said which one the vehicles the new deceased person was in or released the identity. 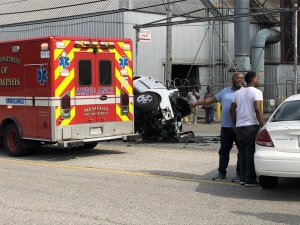 One person injured in the crash was a pregnant female, who was listed as being in critical condition.

Another male was also transported.

MEMPHIS, Tenn. – Memphis police report there were a total of six highway shootings in the past seven days. That’s almost a third of the total recorded so far for 2021.

A woman tells police she was driving on I-240 near Mt. Moriah Wednesday afternoon when another driver started yelling at her before pulling a gun and opening fire. No bullets appear to have hit her car.

MEMPHIS, Tenn. -- When a frustrated renter called code enforcement to get debilitating problems with her house fixed, she also called the WREG Problem Solvers.

From the outside, the stately home occupying the corner of Peabody Avenue and South Camilla Street needs work. Still, Kimberly St. John saw potential. She and her husband moved in more than a year ago, along with his mom and her grandmother.

AUSTIN (KXAN) – A trail of texts, social media messages, eyewitness accounts and a recorded phone conversation led police to the 17-year-old accused in the stabbing death of a 19-year-old during a fight in east Austin, Texas last month.

According to the Austin Police Department, Christopher Michael Garcia, 17, fatally stabbed Misael Sanchez in a fight on the evening of Feb. 16.

Pedestrian dead after being hit by vehicle in Whitehaven