Atkins owned the home on Keely Cove where fire broke out Monday in a converted rear shed. A family including a 32-year-old man, a 19-year-old woman and the baby were living in the apartment.

The baby was in its crib inside the building alone when the fire started, according to police reports. It was not clear how long the baby was left alone.

The father was down the street doing yard work while the woman was in the garage when they were alerted to the blaze.

The baby was flown to the burn center at University of Cincinnati Medical Center, police said. 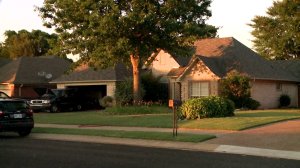 WASHINGTON (NEXSTAR) -- Democratic lawmakers are currently working on a plan that could expand the child tax credit to send recurring monthly payments to adults with children, according to The Washington Post.

The payments would be included in President Biden's $1.9 trillion relief package.

Detectives began the investigation on January 10. So far, four people have been arrested on rape, kidnapping and trafficking charges.

The new plan comes after a record 332 people died violently in Memphis in 2020.