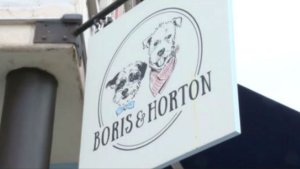 NEW YORK — At Boris & Horton in New York City the seats and treats are not just for humans.

“I have coffee. Colonel has donuts and biscuits and stuff like that.”

“Are dogs ever allowed in here?”

“Absolutely not. No dogs at the coffee bar.”

Food is prepared in an area completely separate from the playroom. This set up is similar to other cafés that have opened their doors to pets. Cat cafés originated in Asia and have been popping up across the United States, including in Utah, Texas and Virginia. Homeless cats live at the locations and wait to be adopted by visitors.

The first café for dogs opened in Los Angeles in 2016 with the same concept. 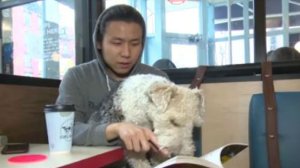 At Boris & Horton, the policy is B.Y.O.D. – bring your own dog. But you’ll find plenty of people who are here without a pet, just to enjoy the atmosphere.

“I can meet up with my friends who have dogs and I can spend time with them, which I really enjoy, especially not having my own dog, I love to pet and cuddle with other dogs,” said Rose Himmelmann.

The coffee shop is such a hit, the company plans to expand.

For dogs and dog lovers everywhere, that’s something to bark about.

CARROLLTON, Texas -- Police in Texas have arrested a woman who allegedly claimed she had contracted coronavirus and planned to infect others.

Lorraine Maradiaga, 18, is charged with making terroristic threats for content she posted on Snapchat.

NEW YORK — There are as many as 10 million low-income, childless adults in the United States who are eligible for the federal government's stimulus payment program, but are at risk of missing out on the money, according to tax experts.

That's because they aren't required to file tax returns, making it harder for the IRS to verify their income -- or even to know who they are or where to find them.

China has ended its lockdown of Wuhan, the original epicenter of the coronavirus crisis, as the city reemerges from a deadly outbreak that is now raging across the globe.

But even as Wuhan reopens its borders after 76 days, some restrictions within the city will remain in place, and officials warn that the threat of further infections remains far from over.

US states race to fight the nearly 400,000 coronavirus cases with long-awaited medical shipments

US states race to fight the nearly 400,000 coronavirus cases with long-awaited medical shipments