MEMPHIS, Tenn. — A Raleigh couple said they were getting ready for church Sunday morning when two men they’d never met appeared at their door.

“’Mother******, let me in. Open the door,’” a neighbor, who asked to remain anonymous, said she heard the men shouting. “I saw the two men go to the side door, and they were beating on that door, hollering the same thing.”

Police said the men finally managed to force their way inside the home on Jewell Road and punched the homeowner in the face, then left.

But a short time later, police said the men returned with guns and opened fire, striking the house and at least one vehicle in the driveway.

Neighbors who WREG spoke with said they heard up to 20 gunshots.

“It was quite a few,” Connie Martinez said. 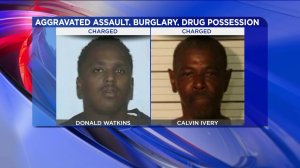 It turns out the accused shooters live right around the corner on Allen Road, police and neighbors said.

No one answered when WREG knocked, but police said they found Calvin Ivery hiding in the attic with three bags of what appeared to be heroin.

Police said they found Donald Watkins hiding in a neighbor’s house, which they say he had broken into.

Neighbors had only good things to say about the couple whose home was targeted.

“They’re good neighbors. I’m glad to have them,” Martinez said.

They can’t fathom why Ivery and Watkins would want to do them harm.

The homeowner’s surveillance cameras captured the entire incident, but they were too afraid for their safety to share it.

Ivery and Watkins are being held in the Shelby County Jail.