HARDEMAN COUNTY, Tenn. — A near record-breaking copperhead snake was found in Hardeman County.

The venomous snake measured 49.5 inches long, just about three inches shy of the world record. Unfortunately for the snake, it’s life came to an untimely end.

“It darted out straight out in front of me, and I hit it,” Bub Stevens said. “I thought, ‘That looked like a snake.'” 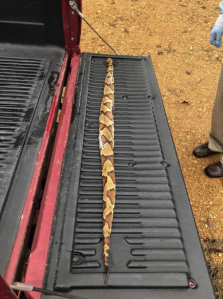 Stevens was traveling Old Highway 64 near Bolivar, Tennessee, when he ran over the huge copperhead snake.

At first he didn’t have any idea what kind of snake it was.

“So I backed up and got out, and sure enough it was a big copperhead,” Stevens said. “By that time it was dead. So I just got some gloves I had in my truck and picked it up and threw it in the back of my truck. I thought, ‘Man, that’s the biggest snake I’ve ever seen.'”

Stevens called his friend Anthony Landreth, a well known Hardeman County outdoorsman, who came to take a look at the snake.

“When I looked over in back of his truck, and I saw that snake, I knew it was something special about it,” Landreth said. “Because I’ve seen lots of copperheads and lots of cottonmouths; never seen a copperhead like that. Never.”

As it turns out, the snake, which measured 49.5 inches, is just three inches shy of a world record for the species.

“I’m 59 years old; I have never seen any copperhead, alive or dead, that even comes close to that,” Landreth said.

Landreth donated the snake to the Tennessee Wildlife Resources Agency (TWRA), who were equally impressed.

The snake’s skin does have some damage from being scraped across the road, but plans are to have a taxidermist mount the snake so it can be put on display for educational purposes.

Officials said the public shouldn’t be concerned about going into the woods, as this is a rare snake that lived a long time. They did stress at this time of the year to use caution.

“This time of year you do need to pay attention in the woods,” Spencer said. “Snakes are on the move. It’s getting colder. Snakes are going to ‘den’ up, so be careful where you’re stepping. But just be smart if you see a snake. Stop, back up, let it goes its own way. You go your way.”

There are four venomous snakes in Tennessee, and the copperhead is one of them, along with a water moccasin and a couple of rattle snakes. But before you grab your shovel, keep in mind it’s illegal to intentionally kill the venomous snakes.

Trial for US basketball star begins in Moscow-area …

‘Give me all your money’: suspect robs employee at …

Police investigating after explosion in Germantown

Pass It On: Help for a Blind Kroger employee

‘My son is gone’: Family mourns victim killed in …

Four charged after carjacking leads to crash in Midtown

Trial for US basketball star begins in Moscow-area …

‘Give me all your money’: suspect robs employee at …