MEMPHIS, Tenn. — Multiple families are in mourning across the city after more than a dozen people were injured over the weekend. Two of the shooting victims died, including a young mother.

Detectives are still piecing together the moments leading up to 19-year-old mother Jermeisha Nance's death early Sunday morning. They said a total of five people were hit by gunfire inside the Diamonds of Memphis Club.

"High-spirited girl, very bold, and it's just tragic that I have to live with the fact that she is no longer here for violence," the victim's father Keland Nance said.

Nance's death isn't the only murder police said they're looking into from the weekend. Hours after the Diamonds Club shooting, two men were shot in North Memphis off North Seventh Street, and one of them didn't make it.

In total, least 15 were people shot, including the two victims who died. 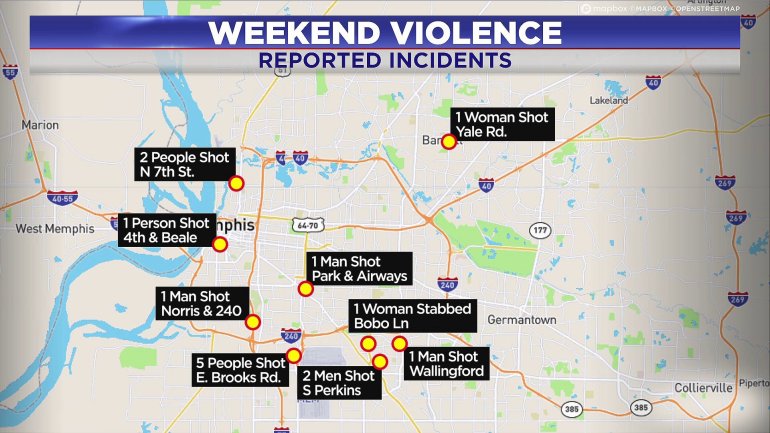 "I feel the same as when one person gets shot. It's horrible," Memphis resident Asad Mujihadeen said.

He was working on a home on the same Parkway Village street where a man was shot Saturday.

Mujihadeen, who has served time himself, said he's now dedicated his life to work and to mentoring children to not go down the wrong path. He said fighting violence starts with education.

"You have to get out in the streets and try to talk to the kids and find out what they're doing," he said. "If you change the way people think, you'll change what they do."

It's unclear if anyone has been arrested for the shootings or how many people in the cases knew their attacker.

So far this year, police said there have been 154 homicides, compared to 152 this time last year.

Oprah Winfrey joined the growing list of celebrities who are donating money to coronavirus relief efforts.

The media mogul announced on Thursday that she donated $10 million "to help Americans during this pandemic in cities across the country."

MEMPHIS, Tenn. — A man who previously spent time behind bars after pleading guilty to attempted murder was arrested on Sunday in connection to a deadly shooting in North Memphis.

On Sunday, April 5, officers were called to the 700 block of Leath where they found Tydarius Cunningham dead from multiple gunshot wounds.

The Department of Homeland Security and Centers for Disease Control and Prevention are now restricting cruise ship passengers and crew arriving in the US from boarding domestic commercial flights.

The restrictions will apply even to people not showing symptoms and also would require 14-day quarantines for cruise passengers and crew.

‘Tiger King’: The not-so-secret formula behind its popularity

Man charged for refusing to leave birthday party during pandemic

Coronavirus case count: At least 3,321 cases confirmed in Tennessee; 1,638 in Mississippi; 819 in Arkansas