MEMPHIS, Tenn. — At least three more guns are now in the hands of criminals.

That's after people left them in their cars in a Cordova neighborhood and thieves broke in.

The cars were parked within blocks and were hit between Monday night and Tuesday morning.

Police said a truck on Snow Drift Lane was unlocked when a thief rummaged through and took a handgun with a laser built in. 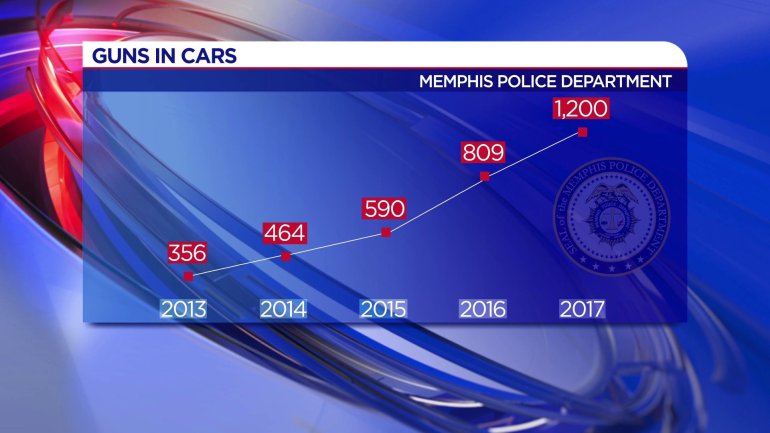 They're trying to find out if the crimes are connected.

"That's just carelessness. I own a gun. I make sure it`s with me all the time or put it up," said Terence Ross, who lives in the neighborhood. "I have been hearing about break-ins and stuff like that. I just lock it in the garage, pull it up in the garage and shut the garage."

That's wise move according to Memphis police officers, who begged people to clear out their cars and keep them locked.

It's a message they've preached time and time again on our news as they've watched more and more reports pile up.

Last year, MPD said 1,200 guns were reported stolen out of cars. That's triple the amount since 2014 when a law went into effect allowing people to keep them in a car.

"How would you feel as a responsible gun owner if you car was broken into and your gun was stolen, and that gun was used to kill an innocent citizen?" Weirich asked in an interview in March 2018.

Police said they have the serial numbers for the guns, and also found DNA on the scene.

If you have any information, call Crime Stoppers at 901-528-CASH.

Samuel Blankenship, 62, was arrested in connection with a Friday evening crash at East Raines Road and Delp Street.

MEMPHIS, Tenn. -- The man who was accused of pointing a gun at protesters Wednesday night has been arrested.

Court documents say Paul Staples pointed a handgun at protesters outside of his residence in the 400 block of Main Street Wednesday night. Protesters had gathered in the area in response to the news that only one of the three officers involved in the death of Breonna Taylor would be indicted.

MEMPHIS, Tenn. -- A man was killed in a shooting in Whitehaven overnight, police said Saturday morning.

Officers responded just after midnight to a shooting in the 1700 block of Piping Rock Road, near Raines and Millbranch.

Teenager in critical condition after shooting

Woman shot in Whitehaven; two suspects on the run

Memphians work to get more census responses after deadline extension

Body found in SUV in Midtown

Teenager in critical condition after shooting