MEMPHIS, Tenn. — Police Director Michael Rallings said one reason for the rise in violent crime in Memphis is out of his hands.

WREG discovered around 2,000 guns were reported stolen last year, and 851 of them were taken out of cars.

Rallings said that’s due in part to new state laws.

“Guns in cars is one thing I will always talk about. We saw an increase in the amount of guns being stolen,” he said.

In 2014, Tennessee implemented a law allowing gun owners to legally tote their loaded firearms in their vehicles even if they don’t have a state-issued handgun-carry permit.

He said in 2013, before the law went into effect, there were only 378 guns stolen from cars.

“Laws have unintended consequences,” said Rallings. “We cannot ignore that as a legislature passes laws that make guns more accessible to criminals that has a direct effect on our violent crime rate.”

MPD recovered more than 2,700 stolen guns in 2016, but Rallings said it’s hard to make progress when guns are stolen nearly every day.

WREG first told you about a rise in gun thefts last month when thieves took nearly two dozen from homes and cars in just three days.

“I looked down and both were gone,” said Marques Burns.

Burns claimed a thief swiped his handgun loaded with seven rounds and a magazine clip from his middle console. There was no sign of a break-in, so he has no idea when it happened.

“I will not leave it in the car anymore. It’s not safe,” said Burns. “It could be in the hands of anybody.”

Rallings said his new concern: a bill eliminating the need to get a permit to open carry a handgun.

We reached out to the NRA to get their reaction to this story, but have yet to hear back.

Director Rallings is asking gun owners to note the make, model and serial number of your gun. It will help police if it gets stolen.

He’s even made an inventory sheet for you to download and print. 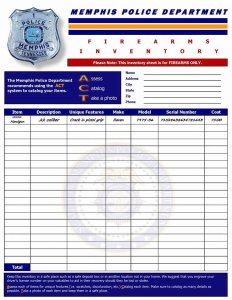 VIDEO: 1 killed in officer-involved I-65 shooting

Whataburger not coming to Collierville

Is sneezing a symptom of omicron?