The investigation is at its beginning stages, but it appears the officer was not on call when the wreck happened.

Details of what caused the accident haven't been released, but investigators with the Arkansas State Police determined the cruiser, driven by Blytheville officer Jonathan Penny, hit the back of Wright's motorcycle. 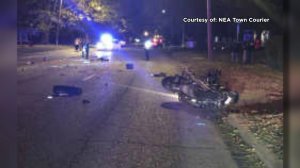 Wright did not survive his injuries.

Vicky Johnson lives two doors from where the crash happened and said she saw the impact from her front yard.

"I saw the policeman flying down the road, and I seen when he caught the end of the dude's bike," Johnson said. "The dude went up in the air, hit the window, came back down and hit the ground."

Blytheville police chief Ross Thompson told the Northeast Arkansas Town Courier newspaper it was his understanding the police unit was not on any kind of a call and was not in any kind of emergency operation.

WREG reached out to Thompson to find out more about the accident and the status of officer Penny and to see if Penny was speeding when the crash happened.

"The police here in Blytheville, they fly through these streets all the time," resident Sparkle Hill said. "There's no emergency going on because if there was an emergency, your lights would be on. If your lights are not on, why are you flying?"

According to the Blytheville Police chief, officer Penny was treated at a local hospital following the accident, but we've haven't been told the extent of his injuries.

“I was making a left turn in the turn lane going on to Craft Road off of Elvis Presley," he said.

NASHVILLE, Tenn. (AP) — Tennessee on Monday set two new execution dates, days after putting to death its seventh inmate in the past year and a half.

TATE COUNTY, Miss. — Not even a week on the job, and one Dollar General employee came face-to-face with robbers.

Last month, Adina Dancy, who was only on her fourth day on the job, and her co-worker were preparing to go home for the night.

Memphis women accused of stealing $9,000 of perfume from Arkansas shops

Memphis women accused of stealing $9,000 of perfume from Arkansas shops