SHELBY COUNTY, Tenn. — More and more firearms are winding up in the hands of children, and both city and county leaders are blaming gun owners.

WREG spoke to one mother who lost her son to gun violence and is trying to convince children to put the guns down.

It was April 2017, when 17-year-old Deago Brown went to get a snack at a store on Tillman across the street from a church he joined the day before.

He stood in the store’s entrance when police say a 15-year-old girl walked up to him, held a gun to his forehead and pulled the trigger.

By the time his mom, Carol Brown, got to the store, he was dead.

“That was my son. It still hurts every day. God is my comfort,” she said.

Brown didn’t know the teenage girl, Teriyona Winton, now charged with her son’s murder. But she says she heard a man convinced her to do it because he was upset her son tried to get out of a gang.

“It breaks your heart, because every time you see a child with a gun, it hurts. It hurts others,” said Brown. “[His brother] thinks about it all the time. He even said he wanted revenge. I said, that’s not the way to do it.”

Carol has been preaching prayer and nonviolence, hoping it resonates with children in her Binghampton community — especially since more and more guns are winding up in their hands.

According to new statistics from the Memphis police department, in 2016, 69 juveniles were caught carrying handguns. That number continues to increase every year.

So far in 2019, it’s been no different. More than 65 juveniles have been caught with guns as of July. It’s set to outpace the years before. 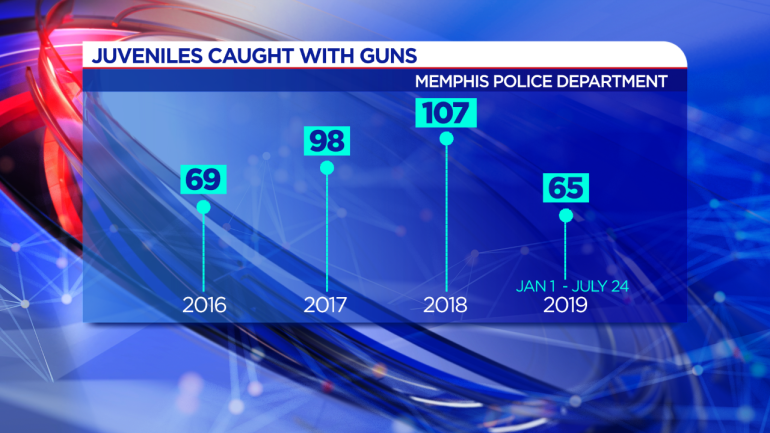 He says many times the children claim they’re carrying for protection. What’s even more unnerving though, there’s a growing number of kids looking to do harm.

“[Aggravated] robberies are up astronomical in this year alone. Violent juvenile crime is up 64-percent,” he said.

Judge Michael says he’s studied the stats and believes more firearms are on the streets because more gun owners aren’t locking them up.

“When those guns are stolen, they aren’t taken to the range. They are used in crimes,” he said.

In 2014, a state law went into effect allowing drivers to bring lawfully owned firearms into their vehicles without a carry permit.

Since then, the number of firearms stolen from cars has dramatically increased. This year set to outdo the others. 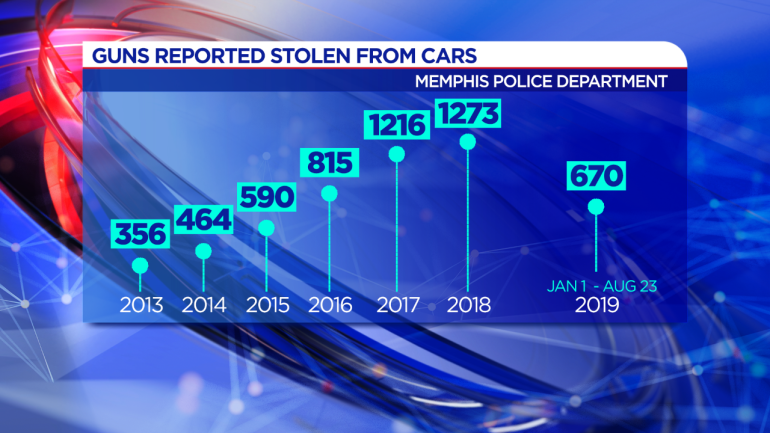 “It’s up to gun owners to solve the problem. Be responsible. Lock your guns up. That’s the only way to stop it,” said Michael.

He said often times, the thieves breaking into cars are children, and they sell the guns to make a quick buck.

Memphis Police said it is also monitoring the situation, and reiterated the data isn’t a coincidence.

“We see videos all of the time of juveniles just roaming around and pulling on door handles waiting to find an unlocked door,” said Deputy Chief Don Crowe.

Others have made their own observations like Pastor Shun Abram, who works with youth in Binghampton.

“You have a lot of people in hopeless situations,” he said. “Living from crisis to crisis to crisis, it changes you. How can we, like me being a pastor, come alongside families to help stabilize the homes?”

His church is now offering group sessions to help children and young adults process the trauma they see instead of turning to gun violence. He’s reached out to those who witnessed Deago Brown’s death.

“The teenagers there who saw that, see, they have to process that stuff. If they don’t process that properly, what do you think? It’s a hardening,” Abram said.

Deago Brown was set to graduate high school. He had hoped to turn his life around and maybe become an artist.

“When I walk in the street, I just look up in the sky. I see that say same smiling face,” said Carol Brown. “He’s letting me know he’s okay. I thank God.”

It’s unclear where Deago Brown’s alleged killer got her gun.

She’s being charged as an adult, and if convicted, could spend the rest of her life in prison — another life destroyed due to gun violence.

Finding the perfect Valentine’s Day gift for your spouse can be difficult. It should be specific to your loved one, but can also be something for you to share.

Giving a personalized gift this Valentine’s Day, whether for your significant other or your bestie, is a great way to express your feelings.

If you’ve just started dating, gift-giving and holiday protocol can be difficult to navigate because nobody wants to come across too strong or indifferent.

Live At 9 with Mayor Jim Strickland

Woman says she tried to warn MPD about officer now …

‘The spirit led me to go’: Officer reflects after …

Pedestrian struck, killed at I-240 near Walnut Grove

Toll of police brutality on display at State of the …

Officer reflects after saving teen father on I-40 …