DESOTO COUNTY, Miss. — Polls will open Tuesday in the Magnolia State, and two of the main candidates vying to be the state’s governor traveled the state Monday to make their final push.

To make sure things run smoothly for the election, the chairman for each precinct prepared and sent out the  materials for the 41 polling locations. They’ve staffed up at each precinct, anticipating close races.

The race for Mississippi’s next governor has attracted interest from the nation’s top politicians. Polls show things are close between the Democrat, Attorney General Jim Hood, and Republican, Lt. Governor Tate Reeves.

Both are highlighting the differences in how they would lead Mississippi.

The state hasn’t had a Democratic governor in more than a decade, but Hood believes he’s in a good position to change that.

“I think if we get out voters out, a lot of moderates will vote for me in this race,” Hood said. “A lot of Republicans will come over because people want to see some change. I think that’s the formula and they know I’ll govern for Republicans and Democrats.”

As they try to get voters to cast their ballots in their favor, DeSoto County election commissioners hope for a larger turnout than normal.

So do the candidates, knowing the importance of each vote.

“Some of these elections have been determined in the past, anywhere from 8-12 votes in the provisionals, so every vote does count,” he said.

Poll workers will be a precincts at six o’clock Tuesday morning. The polls open at seven. Make sure to have proper ID and double check your voting site. 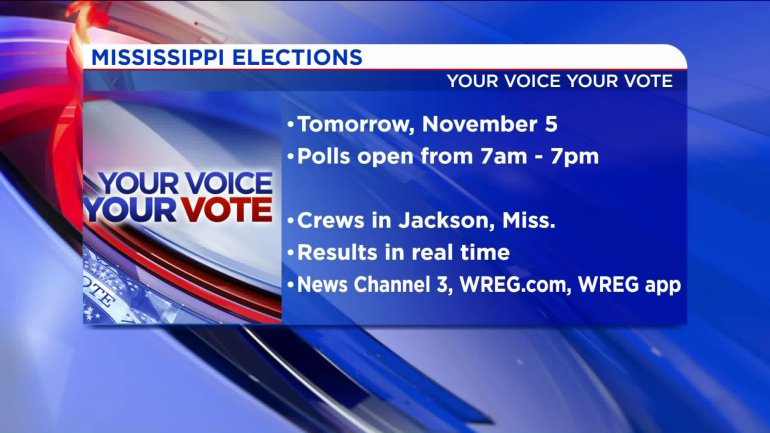 MEMPHIS, Tenn. -- Memphis Police say one man has been shot in South Memphis.

Police responded to a report of a shooting at Belmar Street near Fernwood Avenue.

Wardell Guest said he was driving his red truck on Peebles near New Horn Lake Road where crews had apparently been restriping the road.

Memphis is experiencing a blood shortage crisis. Here’s how you can help.

Local hospitals prepare for COVID-19 surge in the Fall

Postal delays persist around the country with mail voting underway

Elton John gets his own Barbie doll

Two suspects in custody after crash, manhunt on I-40 near Arlington