MEMPHIS, Tenn. — An admitted Memphis rapist who’s been on the run for months is finally in police custody.

Kelvin Montgomery was supposed to be sitting in prison for torturing and raping a woman in East Memphis in 2014, but he never showed up to start his sentence.

Wednesday night, he was finally found on a boat in Orange Beach, Alabama with a woman reported missing from Arkansas.

“I was scared to death,” said Rafael Kieffer.

Kieffer knew Montgomery as Mike. He lived on the boat next to him with his girlfriend.

Wednesday night she came to him for help claiming Montgomery beat and choke her.

Kieffer called her sister, and found out the battered woman was Shasta Naumann from Eureka Springs, Arkansas.

Her family and police had been looking for her for a whole year.

She was last seen with Montgomery.

“I got on the internet and saw all his mugs,” said Kieffer.

He called authorities in Orange Beach and in Shelby County. Minutes later, he was arrested.

It’s unclear what new charges Montgomery will face in addition to the 12-year sentence he should be serving for kidnapping, rape and attempted murder.

In 2014, Montgomery took a woman to this East Memphis home on Willow.

The victim said he drugged her and then tortured her for hours until she played dead and escaped when he fell asleep.

The judge let him out on bond, and he never showed up to start his sentence.

Family members of both women told WREG they’re relieved Montgomery is locked up, but feel like the judicial system failed them.

Authorities in Alabama said Naumann is physically okay, and she’ll remain in protective custody until her family from Arkansas picks her up.

It’s unclear when Montgomery will be brought back to Shelby County. 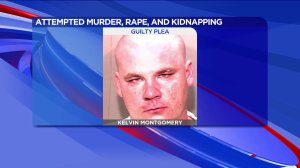 (NEXSTAR) – A home in Los Angeles where followers of Charles Manson murdered Leno and Rosemary LaBianca in 1969 has just sold for $1.875 million, according to listing records.

The house, a two-bedroom, two-bathroom residence located in the Los Feliz section of Los Angeles, had last been listed for sale in Oct. 2020 for just under 2 million.

Juneteenth in Memphis: A celebration of the past and present

MEMPHIS, Tenn. — Good Music, food and a chance to learn much more about the newly signed federal law.

This year for the first time in nearly 30 years, the Memphis Juneteenth festival was held at a new location.  Organizers said this was by design, as they are hoping it will mark the end of controversy, while ushering in the beginning of change.

WASHINGTON (AP) — Female soldiers at Army bases in Texas, Colorado, Kansas and Kentucky face a greater risk of sexual assault and harassment than those at other posts, accounting for more than a third of all active-duty Army women sexually assaulted in 2018, according to a new Rand Corp. study.

The study, released Friday, looked at Army incidents, and found that female soldiers at Fort Hood and Fort Bliss, both in Texas, faced the highest risk, particularly those in combat commands or jobs such as field artillery and engineering. And units with more frequent deployments to war also saw higher risk. Other bases with high risk were Fort Campbell in Kentucky, Fort Carson in Colorado and Fort Riley in Kansas, said the study which reviewed assault data from previous years.

These were the fastest-selling new and used cars in May

Lochte flops: Olympic career likely over after 7th in 200 IM

Here’s how you can get paid to eat ice cream

Officials: Arrest made after sister-in-law of former Mississippi state Rep. was found dead in trailer fire

President Biden’s dog, Champ, passes away: ‘We love our sweet, good boy and will miss him always’

Juneteenth in Memphis: A celebration of the past and present

These were the fastest-selling new and used cars in May