MIAMI — Police have identified the six people who died when a pedestrian bridge crumbled Thursday west of downtown Miami, Florida.

“This ends with a tragedy of six. … We are pretty confident that no one is left,” he said.

Rescuers worked day and night to extract the victims and mangled cars from 950 tons of steel and concrete. A police motorcade escorted the remains of five victims to the medical examiner’s office. A sixth person died at the hospital.

The bridge was meant to connect the campus of Florida International University with a neighborhood that’s home to 4,000 of its students.

Alexa Duran, a Florida International student, was in a gray Toyota 4Runner that was extracted from underneath the rubble on Saturday afternoon. The 18-year-old was driving under the bridge Thursday when it came crashing down, and a friend traveling with Duran tried unsuccessfully to pull her out.

“My little girl was trapped in the car and couldn’t get out,” her father, Orlando Duran, told El Nuevo Herald, a sister newspaper to The Miami Herald.

She graduated from Archbishop McCarthy High School in Southwest Ranches, Florida, in 2017, the school said on Facebook.

Ecaudorian Foreign Minister Maria Fernanda Espinosa said on Twitter that Duran’s father was Ecuadorian and that the country’s Consulate is working to learn more about the accident and provide assistance to the family.

Alexa Duran’s sister, Dina, posted a tribute on Instagram. “Rest In Peace my sweet little sister. Words cannot describe how heavy my heart is. I would give anything to take your place and all of your pain,” she said.

Brownfield was a crane technician for Maxim Crane, but he was not working on the bridge. In a Facebook post, Chelsea Brownfield said they had been married for almost 4 years and have three girls.

“Please keep us in your prayers, as I now have to find the words and the answers to tell my girls that their Daddy is not coming home,” she wrote. 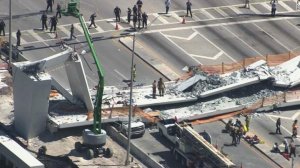 Navarro Brown, 37, was working on-site at the bridge for Structural Technologies VSL, a company that specializes in bridge cable tension and construction systems, the company told CNN affiliate NBC 6.

After the bridge collapsed, he was taken to a hospital and died there, police said.

Rolando Fraga Hernandez was identified as the victim inside a gold Jeep Cherokee that was removed from underneath the debris on Saturday morning, police said.

Alberto Arias, 53, was pulled from the rubble from a white Chevy truck on Saturday, authorities said.

Arias’s cousin Ismael Segovia told NBC 6 that Arias “went out of his way to help anybody.”

“He was a business owner and he just took a lot of pride in his work and family,” Segovia said.

Oswald Gonzalez, 57, was also pulled from Arias’s truck. NBC 6 reported that he had been a passenger in the vehicle.

PARIS (AP) — An attacker armed with a knife killed three people at a church Thursday in the Mediterranean city of Nice, authorities said. It was the third attack in two months in France.

The assailant was wounded by police and hospitalized after the killings at the Notre Dame Church, less than a kilometer (half-mile) from the site in 2016 where another attacker plowed a truck into a Bastille Day crowd, killing dozens.

MEMPHIS, Tenn. — A shooting in Whitehaven left a woman in critical condition overnight.

According to police, the female victim called for help after having been shot overnight. She was located at the corner of Boeingshire and East Shelby Drive, and rushed to the Regional Medical Center.

TAMPA, Fla. (WFLA) - Zeta is heading northeast Thursday morning after blowing through Louisiana and Mississippi on Wednesday, destroying building and knocking out power to thousands. At least two deaths were reported.

The storm made landfall Wednesday afternoon near Cocodrie, Louisiana as a strong Category 2 hurricane with 110 mph winds fore moving into the New Orleans area and onto neighboring Mississippi.

7-year-old Jeopardy! superfan gets sweet message from Alex Trebek after dressing up as ‘mini-Trebek’ for Halloween