MEMPHIS, Tenn. — A Whitehaven mother of two said she was the victim of a road rage attack after she dropped her children off at elementary school.

The attack left her car totaled and left her feeling helpless. But now, another woman is charged in the attack. 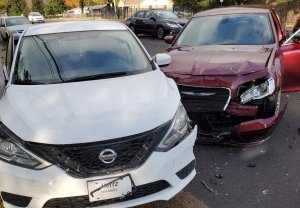 “She intentionally did this,” Erika Flowers said. “She followed me, and she repeatedly hit my car.”

Tuesday morning, Flowers’ Nissan Sentra was sandwiched against a utility pole in Whitehaven.

“The amount that I would have to pay to get my car fixed isn’t even worth the amount of my car,” Flowers said.

What Flowers decried as road rage started just minutes earlier when she was dropping off her two children at Westhaven Elementary School.

“There was another parent who had dropped her child off, and she was in the drop-off lane in front of me,” Flowers said. 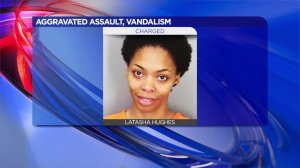 “It was time for her to move, and I sat there and waited for a few minutes as she texted on her phone,” Flowers said. “Finally, I just tapped my horn, and she started to drive, and she smashed on her brakes, and so I went around her.”

Flowers said the woman followed her for three miles down Shelby Drive to Elvis Presley Boulevard, hitting the rear of her car as she turned onto Holmes Road. Flowers said the impact was intentional.

“She sent me spinning into a pole on the other side of traffic and actually caused another car to hit me from behind,” she said.

But Flowers said the wild ride wasn’t yet over.

“She looked me directly in the eyes,” Flowers said. “Her eyes were as red as the devil. She looked at me, and she just backed that car back and rammed full speed at me again.”

Police charged the 32-year-old Hughes with aggravated assault and vandalism in the crash that left Flowers’ car totaled.

Hughes told police Flowers bumped into her vehicle in the school parking lot, and that’s why she was following the woman.

“You’re just not safe anywhere,” Flowers said. “People get road rage because you blow the horn at them to say, ‘Hey, it’s your turn to go,’ and I’m tired of it.”

Hughes has posted bond and is scheduled to be back in court next Thursday.

WREG talked with a man claiming to be Hughes’ husband, who said he disputes the police report.